Trick Of The Light 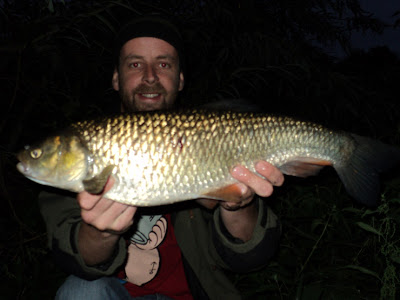 Impromptu evening session on the Wandte, and they really have wised up to us fishermen. No bites until it was nearly dark, not even little rattle - we're here bites. As dusk took hold I had a great bite - which I missed... Don't know how... Next cast got repeated plucks, really little ones, then the meat was gone.

I watched this for a couple of casts before trying to hit one, little rattle, strike, fish! I saw it turn in the shallows and I shouted to Dan I'd hooked the fish we were after (and then some) I needed a net man. My giant barbel headed well downstream as I explained to Dan what I had hooked into. I inched it upstream until we got a good view - my 3 foot odd long barbel was in fact a chub wrapped in a long stream of weed... Ah.

Once it broke free of the weed it put up a good account of itself, cracking fish, 8lb 4oz 4lb 8oz, best chub so far this season... And with that we headed for a pint.

[Edit: Really sorry to anyone who read this last night, the chub was 4lb 8oz - not 8lb 4oz as I wrote. I was delighted with the fish but I didn't mean to nearly double its weight]

[Edit 2: I forgot to post this last night but we found a quivertip from a multi tip rod, near Enfield and as it's a fairly small Wandte world I wondered if anyone reading this had lost it, or knows who lost it - if so please leave a comment and I'll get it back to you]
Posted by Brian at 23:29