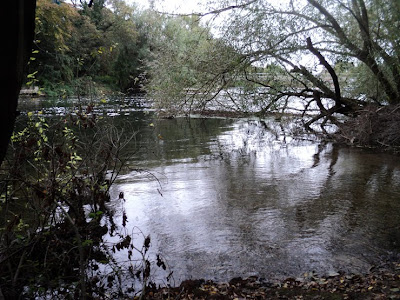 Second trip of the year to Penton Hook, Dan couldn't make it so Darren and myself were joined by Wandte guru Stuart - after his first pike. The early morning water looked great although a little fast. We found a nice looking spot and quickly set up.

Darren & Stuart fished the slacks in the side I aimed for a far side feature, but without enough lead my sprat was quickly swept away into the fast water. I decided to leave it and see. About 20 minutes later I had a run (to be honest I thought rubbish had caught on the line but I wound down to check). 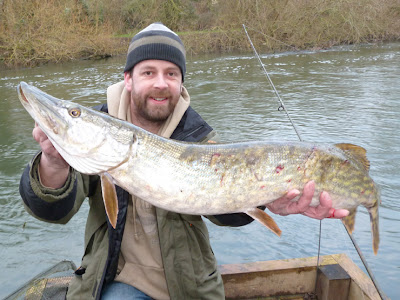 Cracking fight in the fast water and my old friend the bitten pike, the third time I've caught her - going to have to think up a name if I see her again. Didn't weigh her but she's probably still about 8lb 9oz. Pike first cast - fantastic!

Next cast and the ledgered sprat held against the feature and it wasn't long before I was in again. Another superb fight and a fat 7lb 10oz pike, I'll have to check if this is a new fish or a recapture [Edit: New pike]. Pike second cast - this was going to be good! 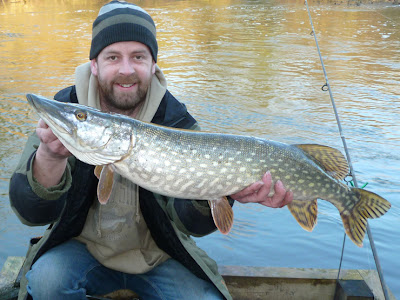 Another hour or so fishing around the features both close and far side but no more runs so we decided to go exploring.

A walk around the island revealed we had the place to ourselves, so we set about ledgering a variety of baits around the island, but we couldn't find any more pike. We got to some tighter swims so I swapped over to float fishing to present a bait a few feet off the bottom, giving the pike more choices.

A cast to a feeder stream was met with a bob on the float before it gently moved away - a typical 20 pounder run. I struck and was met by an enthusiastic but tiny pike about a pound. Still, I love catching them on the float. 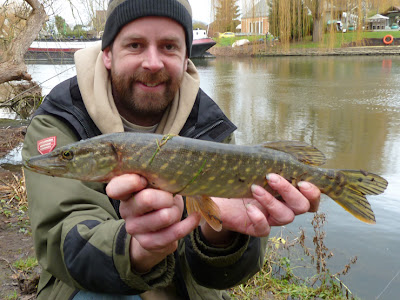 We continued round the island without a touch and we were running out of time. With only a few minutes left there was a bang on Stuart's rod, he wound down and struck - a sprat head was retrieved... But I think that run was enough to make him come back - another piker is born!

We gave it a little while longer to see if the pike would come back, but no more runs. We left the island, Darren cursing his luck, Stuart wondering what might have been and me, the jammy bugger, eager to explore further... We'll all be back!
Posted by Brian at 12:14 6 comments: 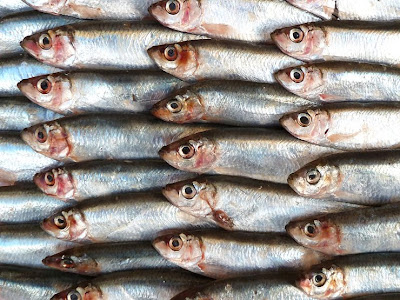 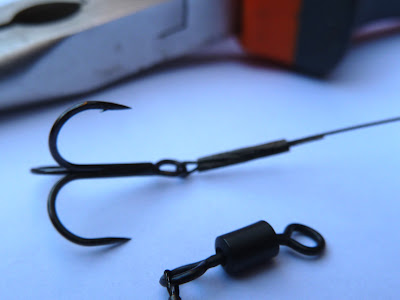 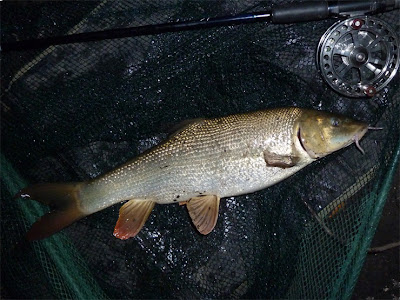 As you can see from the photo - it didn't go exactly to plan... Back to where I found the roach on Tuesday, this time armed with a few slices of bread to pick out the bigger roach. It didn't work, it attracted monster gudgeon and tiny roach (smaller than Tuesday).

After an hour or so the bites dried up so I put a ledgered pellet out to see if there was a chub or barbel about. I missed two wrap-around bites before connecting to the chunky 4lb barbel above. Great fun in the fast dark water and on a center-pin. 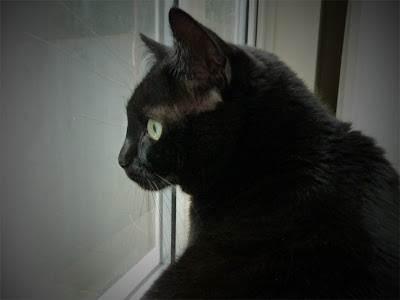 My cat and I have been camped out next to the front door all week, waiting for a Chew Valley Pike Trial 2012 ticket to drop through the letterbox... But the postman didn't come!

I heard demand was higher and there were less 'draw tickets' this year, oh well, I'll have to try and find a river thirty instead...

But if anyone needs a boat partner let me know!!
Posted by Brian at 12:25 4 comments: 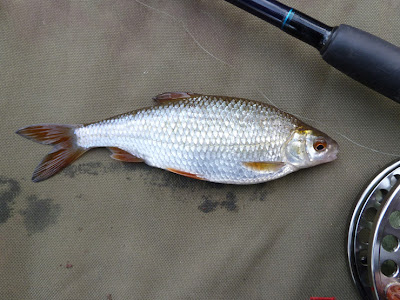 A couple of hours on the river this afternoon, I'm still searching for a pound plus Wandte roach. Maggots fished under a stick float was the order of the day.

I found my target species, but they only went up to about 6oz, still I had a few of them with the odd dace thrown in, a nice way to while away a couple of hours...

Now, where are their big brothers & sisters?
Posted by Brian at 18:47 2 comments:

The problem: The pike at Penton Hook tend to give very little bite indication, normally it's just a bang on the rod-tip or a bounce on the bobbin, and if you are digging around in your bag looking for your mini pork pies or trying to photograph that bloody kingfisher it's a recipe for a deep-hooked pike.

The idea: I've been experimenting with a bolt-rig type set up and although it's early days, it seems to be working.

Copied from the carp anglers arsenal it simply consists of a standard running ledger with a stopper about a foot away from the lead. The pike has enough 'free line' to suck up the bait (this will probably only work with small baits) but soon has to drag the lead along.

When the pike feels something is wrong it tends to bolt giving a very satisfying run. I was worried the pike would eject the bait but they (so far) seem reluctant to release their prize.

I'm not sure if the lead sets the hook (as in carp fishing) or the pike thinks it's going to loose it's meal but either way it seems to work. I'll need to trial if for a longer and in the summer I'll try sight-fishing for them to see exactly how it works.

And should the line break the lead will get stuck in the bottom and the float stoppers will pull off.

Since experimenting with it I've looked it up on Google, and it seems to have been tried but with very little success, with the resistance resulting in ejected baits - but it does seem to work for me.

Has anyone else tried bolt-rigs for pike? Or found a better way to improve shy runs? I am prone to missing obvious solutions!
Posted by Brian at 18:00 9 comments: 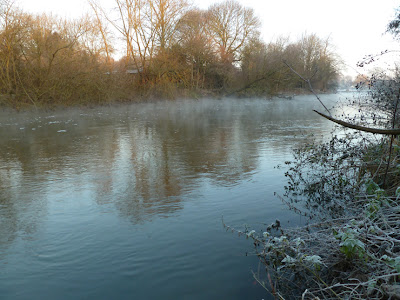 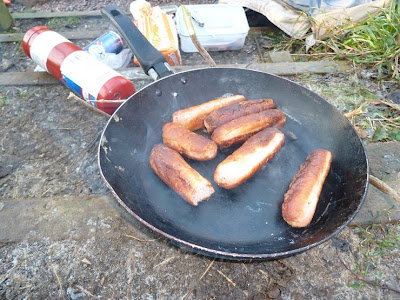 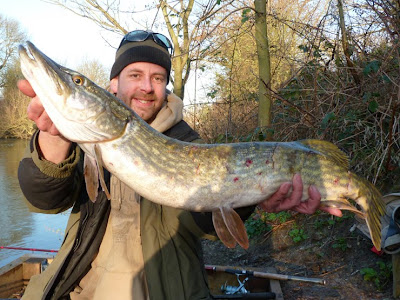 But we will be back to the island soon, there is lots of water still to explore and hopefully a lump or two still to grace the landing net...
Posted by Brian at 11:49 17 comments: 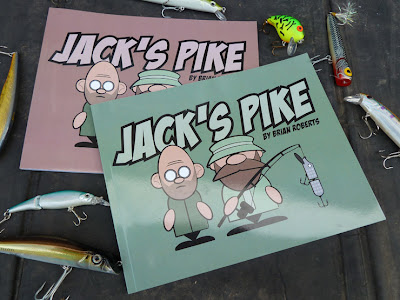 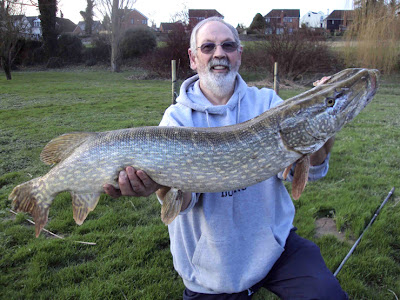 Enough about Jack's Pike, here is Roger's pike from the weekend, 16lb 8oz on ledgered sprat. Great photo (it does help fishing with a professional photographer though). Top work!
Posted by Brian at 11:48 5 comments: 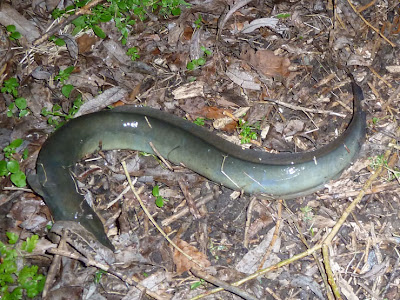 Time to experiment with some new baits, we covered a lot of water so we must have been in the vicinity of our target species (and I'm pretty sure the gear is fine). We just have to tempt one into taking the bait, I'll do some research but if anyone has any suggestions of an effective winter barbel bait please let me know - thanks. 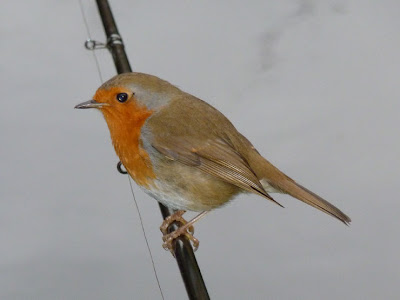 While wandering about looking for new swims I did spot a shoal of perch, no big fish but I'm yet to catch a Wandte perch, so that's my next target (along with a winter barbel).

Meanwhile on the River Wye, which is back to a fishable water level, Roger and Paulos went in search of a pike. A seven pounder to Paulos and a sixteen pounder to Roger - good work guys! I'll pop some photos on here when I get them.
Posted by Brian at 11:41 8 comments: 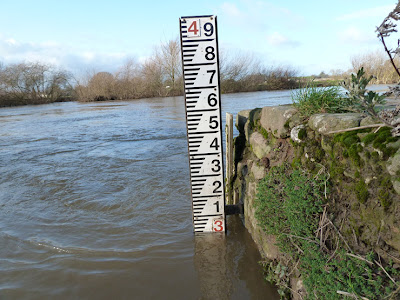 Well the trip to the River Wye didn't go as planned, we did get a couple of pike but the river was far too high. Roger and Paulos are still there and hopefully they'll get another session in before Paulos has to fly back to the States, as for me I'll be back towards the end of February - hopefully the river will be back in the banks by then. 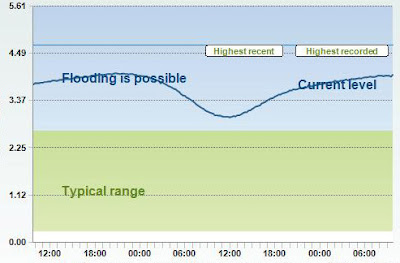 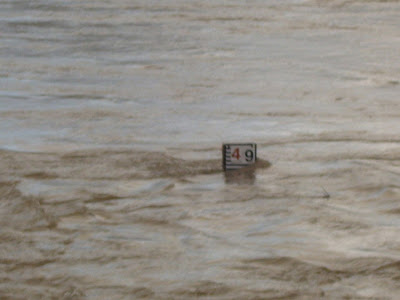 Edit (Friday): And my Mum has just sent me this photo of the Wye... Guess there's no fishing today! 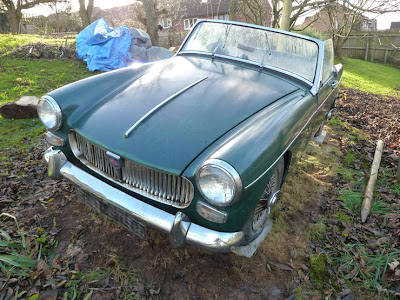 I have found a project for the rapidly approaching closed season - get my old car (1963 MG Midget) back on the road - that should kill a month or two!
Posted by Brian at 18:41 6 comments: 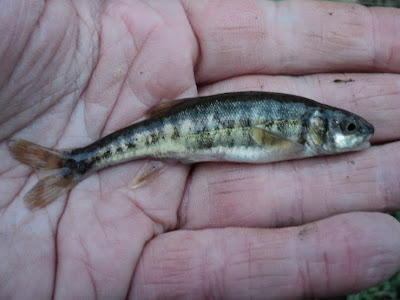 And the first fish of the year - a minnow. Couple of hours brook fishing after a roach, but none showed. I did have a couple of dozen nice dace, so a good trip. I was however plagued by bloody pike crashing through my swim - typical - I didn't have any pike gear! 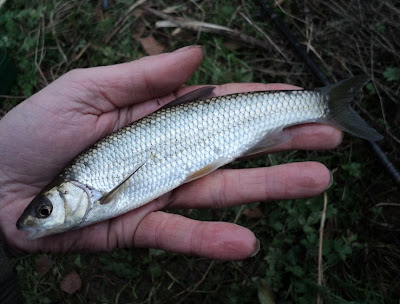