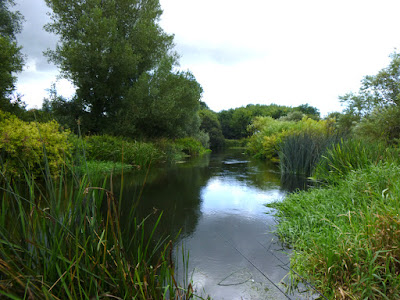 Winter is coming: And now predator season is here, time to track down a few new venue double figure pike - and hopefully a twenty. Zander and perch are on the radar, as is a 7lb winter chub...
Posted by Brian at 21:09 2 comments: 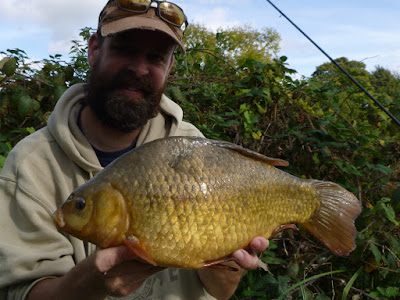 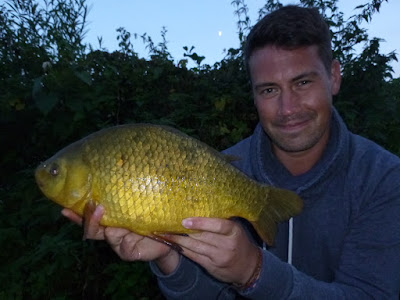 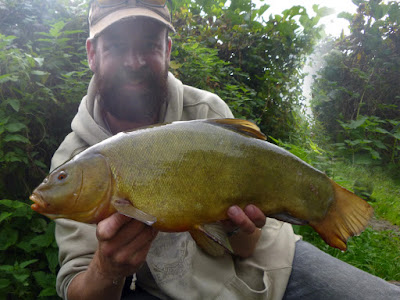 I ventured back to see if the crucians were still feeding in the last of the summer sunshine - and to cut a long story short - no they weren't (or I couldn't find them). I did land a couple of hard fighting tench though which made the trip more than worth while.

That's probably it for the crucians this year - it was a lot more effort than the blog reflects but I'm more than made up with the brace of threes and the new PB of 3lb 8½oz last time... 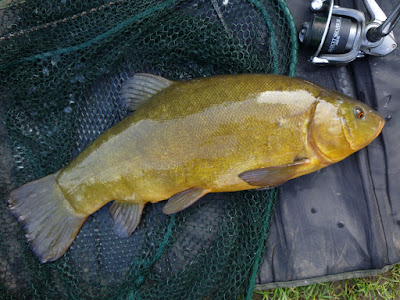 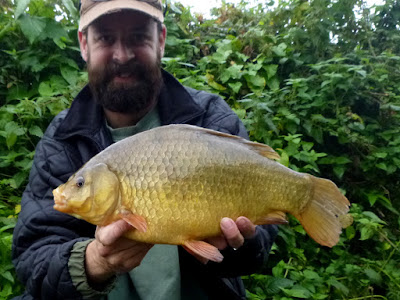 I had refined my rigs over the previous three crucian blanks (if you don't include a tufted duck). But today, it seemed, they wanted to play! Starting with a new personal best, 3lb 8½oz above - brilliant! And with the target three pound mark smashed anything else would just be a bonus... 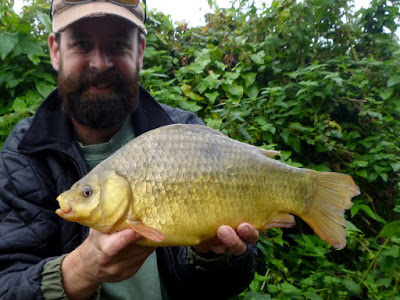 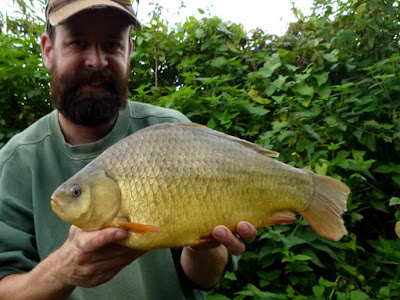 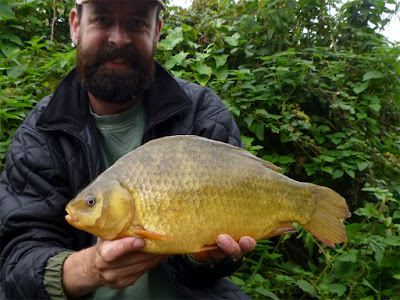 After loosing one at the net and landing a little common carp I landed this 3lb 0oz to finish. Red. Letter. Day!! 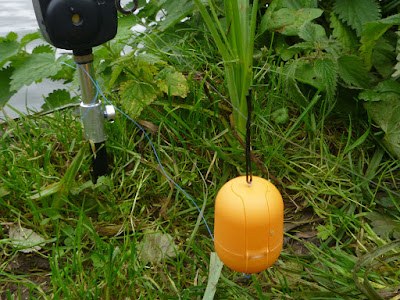 And yes (to those who walked past), my indicators are made out of hair grips threaded though Kinda Surprise eggs - they'll look better when I add a chain and paint them up to look like Minions!
Posted by Brian at 19:14 4 comments: 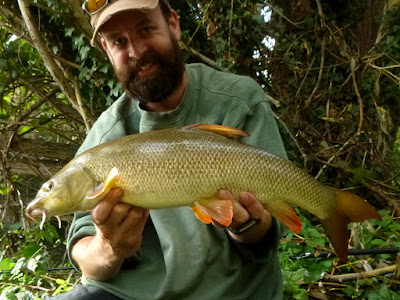 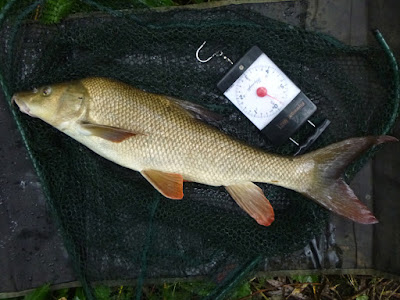 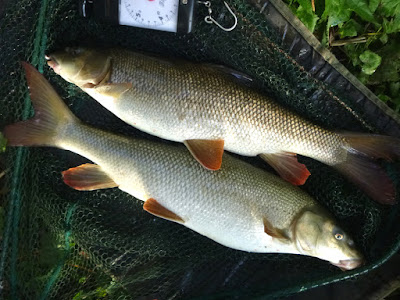 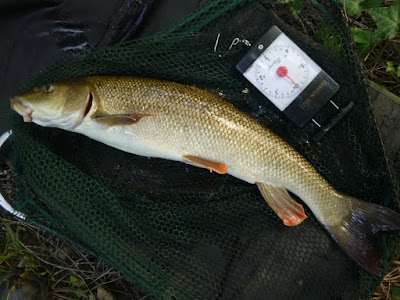 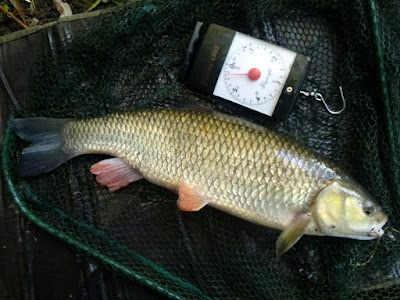 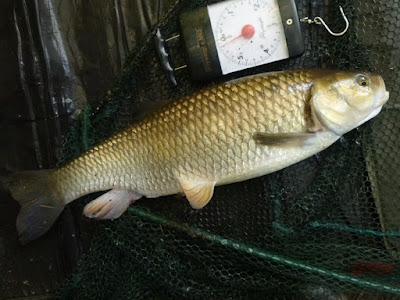 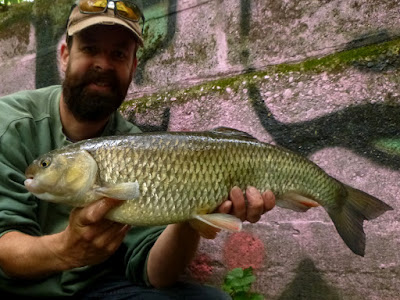 Continuing my quest for small river, big chub I added two more four pounders to the list. A very distinctive 4lb 9oz chub above - which had a weird shaped head - definitely recognise this one if I see him again. And a fat 4lb 2oz below. Great stuff!! 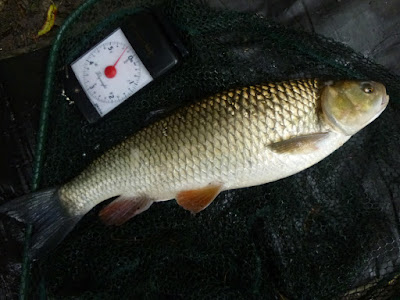 Email ThisBlogThis!Share to TwitterShare to FacebookShare to Pinterest
Labels: Blast From The Past, Jibber Jabber 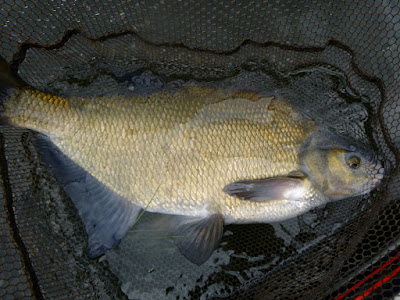 Catching bream is easy! James assured me this morning as we headed out for a few hours on the Thames. I was instructed to bring a big keepnet and a few towels (to wipe away excessive slime) as well as the stick 'n' pin. I had told him about my bream curse...

Well, as I expected, I only caught one bream 5lb (above). What James didn't know is my bream curse affects anyone within a 10 foot radius and as we were in a small boat - even he was stuffed...

Well, he did a lot better than me - but nothing like he was expecting - might be a while before I'm invited bream fishing on the boat again!
Posted by Brian at 17:17 2 comments: 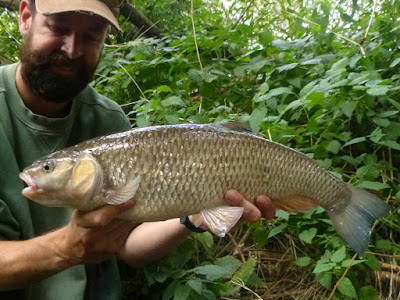 There is no getting away from it; summer is fading into autumn. The days are getting noticeably shorter, the leaves are turning and there is a chill when you're out of the sunshine. Nearly pike time.

I took advantage of the rain last night trying to tempt a chub in the dirty water this morning - and as before the murky water gave them more confidence - tracked in clear water then wait for rain. 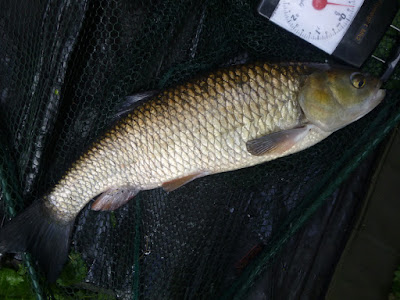 Unfortunately I bumped the first fish, felt like a good chub. Swim two and bait hardly had time to settle, a 4lb 11oz chub with lots of room to fill out (top photo). A few free samples and back to swim one.

The water was clearing, but eventually a few little rattles gave way to a good knock - chub two, 4lb 4oz (mat shot above). Two nice fish but the end of the action, time to spot some for next time! 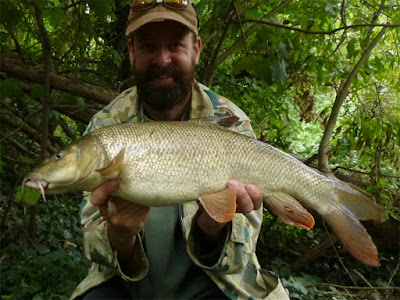 When the water cleared I went in search of barbel, looking for shadows lurking about over the gravels. I wanted to take my season local total to 50 plus before the summer ends...

Mission accomplished; 5lb 12oz (above), 7lb 5oz (below), 5lb 8oz and one about 3½lb. Time to stop playing the numbers game and track down a double (while searching for that big chub). 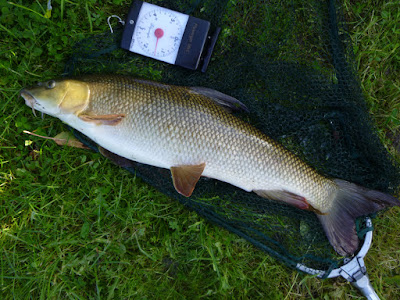 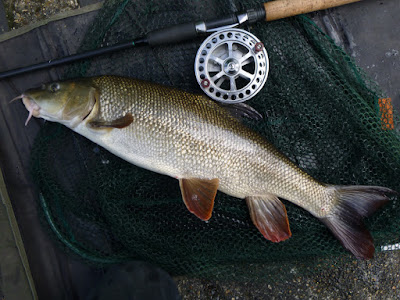 Due to meticulous notes I know that this is my 452nd barbel from the local river and my 47th this season. Unfortunately it could well have been number fifty...

Very quick mission to the river and I managed 3 hook pulls in quick succession - the first of which looked like a double. And the hook came out in the net on the only one landed, about 4½lb.

Bait seemed fine, hook looks fine... Just one of those days - glad to have landed one!
Posted by Brian at 12:11 No comments: 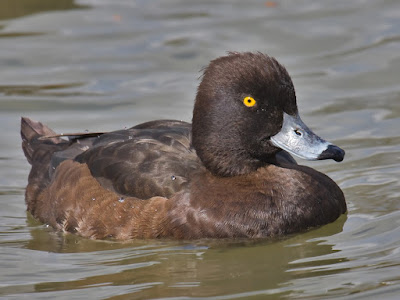 First duck of the season, popped-up single grain of fake corn over a fizzy green groundbait. Tricky swim, had to net him to unhook him. So technically worse than a blank! (Photo from Wikipedia).
Posted by Brian at 19:15 6 comments: 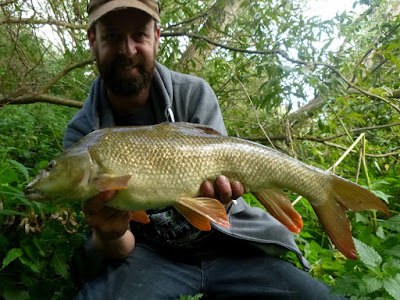 On Friday afternoon I shot back to the river hoping the chub still wanted to play. The river was a lot clearer and the colour was dropping out rapidly. Both of Thursday's swims produced a chub first cast, about 3lb and 2½lb.

But as the water cleared enough to see my target I could watch them spooking off the bait - in fact once I could see them I only hooked one more, about a pound. I'll have to try and track where the shoals are and wait for the right water conditions.

In the clear water I could target the barbel landing five to 8½lb, including a powerful but freaky looking five pounder (pictured) - looks like it's on steroids, I'll recognise this one if I see it again.
Posted by Brian at 14:05 No comments: