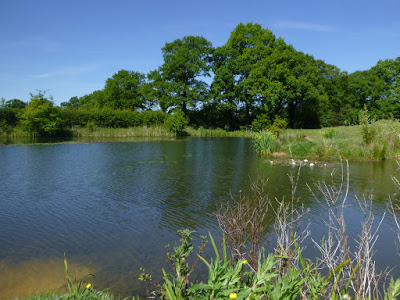 Now it’s pike time - but with Covid 19 on a comeback tour and record floods forecast this winter - we’ll have to see how it goes...
Posted by Brian at 04:17 4 comments: 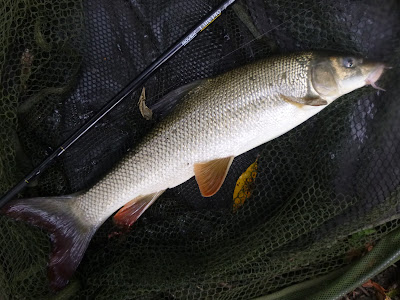 When I broke my rod earlier this month I ordered a new one that evening - another Rovex Lure Pro Quad 9ft - I've been using these for years - I'm a creature of habit! It arrived a few days later, but what should have been a 4 piece rod arrived in 5 pieces.

I sent it back and a new one arrived while I was away over the weekend. Needed a test before Pike Time in a few days. A chub and a little splasher barbel (above) would do nicely - before I made a quick retreat and got on with whatever I was supposed to be doing.
Posted by Brian at 05:52 2 comments:

It's Cold Up North 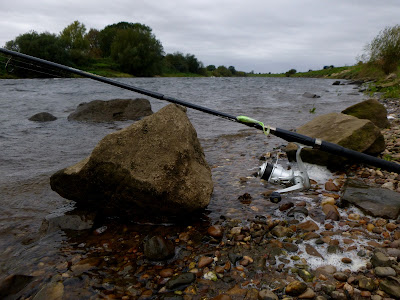 Stepping out of the car it was cold. Really cold. I hadn't bought thermals but I did have a couple of changes of clothes and a rain-suit - I put them all on! Our second annual visit to The Tidal Trent, company was James & Richard and a 48 hour quest for a 15lb+ barbel.

It was windy. Ferociously windy. And cold. We found three adjacent swims and set up - each putting our plans in place. And I'll cut a long, cold story short - no barbel - not even a bite between us! And it was busy, we didn't see anyone else land a fish or even get a bite.

I did have a bit of a wander with the light lure gear to warm up - it was like sea fishing. I landed a blank-saver perch about 10oz (camera back at base camp) and nearly landed my first pike of the season - but unfortunately she spat the lure during a spectacular tail walk.

We fished hard for 32 hours - but it was almost a relief when we called it quits and headed back to London. Great company, and a rare away day this season but conditions were tough (and cold) - but we'll do better next time. Until next time. Next time? Guys??
Posted by Brian at 06:05 6 comments: 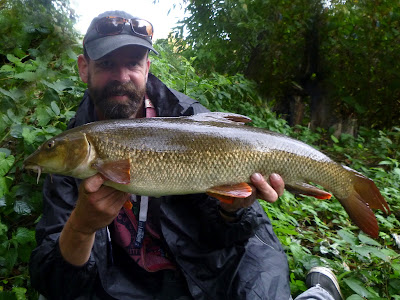 Having hit my summer target I had planned to leave the barbel alone for a while and target the carp in a fairly local pond - but a last minute job ate my morning - plus I had to get bait for the weekend...

Bait shop is fairly close to the river - I took the kit and had a quick blast before loading up with bait on my way back. And four barbel in the drizzle to 6lb 13oz (above) on floating crust - any excuse! 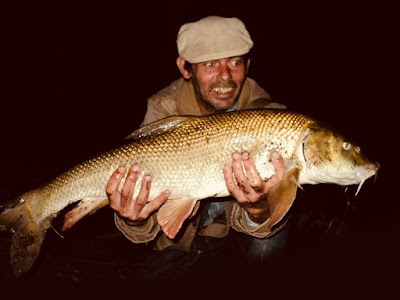 Nine years ago today...
Dan bagged his first double, the first double figure barbel either one of us had ever seen - delighted was an understatement!
Posted by Brian at 06:06 6 comments: 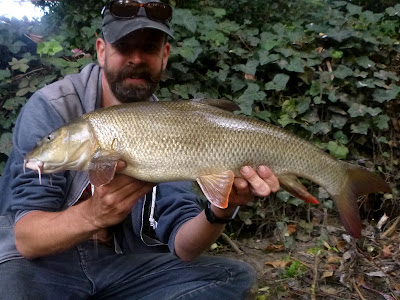 After walking to the river I had about 2½ hours of daylight left - I don't like fishing for barbel in the dark, I prefer to be able to see what I'm doing. Time was tight - but could I bank 3 more barbel?

A splasher first cast - result - but I'd like something a bit bigger to wrap up the 100 Barbel Challenge this summer. After a bit of a wander I spotted barbel number 99 - 6lb 0oz - going the right way.

And then a blind cast was nailed by barbel 100 - 6lb 3oz (above) - cracked it! And added another splasher on my way back down the river - barbel 101. Time for a celebratory pint (at home, not the pub). 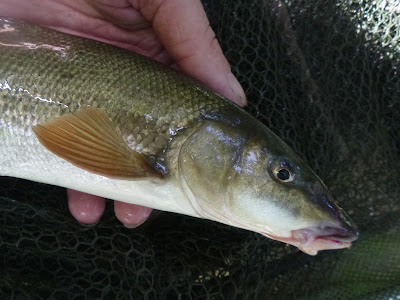 More Covid cases today than yesterday, I’m hoping we’re not going to get locked in just as pike season kicks off! So another afternoon on the sunny river trying to crack this year’s Barbel Challenge...

Seven barbel to 7lb 6oz, four chub to about 3½lb, plus a bonus perch was a great result! Just need to sneak out for 3 more barbel to hit my 100 fish target. And I fancy an away day this month - just in case! 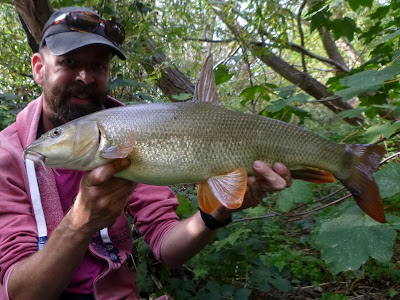 Is there going to be another lockdown? Winter is on it’s way and the C19 cases are on the rise - time to make hay while the sun shines - and the sun really has shone over the last few days.

An afternoon on the river - hot weather but the water is still fairly cool. And four barbel to 5lb 9oz plus about a dozen chub to 4lb 15oz found the net - so close to adding another 5+ chub to the season.

Half A Second Pause 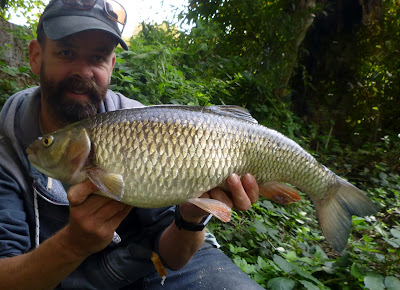 For me the most exciting thing in fishing is watching your pike float hammer under. Second has to be spotting a monster chub, floating a piece of crust down to it and watching those big white rubber lips suck the bait in - half a second pause, strike & all hell breaks loose!

They know where all the snags are and as you turn them from one they aim for another - it was a relief when this 6lb 3oz beauty slipped over the net! The first of two chub (the other was about 1½lb) and four small barbel on crust - loving this chub fishing at the moment!! 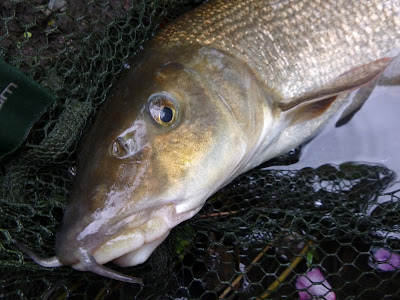 Back on 'pest control' with four more small barbel added to the challenge. Gives me an idea; I could try and catch a small barbel on a tiny lure, proof of concept and work from there... 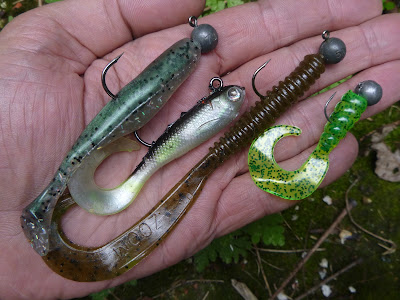 I hooked my second barbel on a lure - by design - and although I only had him on for 10-15 seconds it was long enough to prove the first wasn’t a fluke! It’s filled me full of confidence and I’ll be digging though the lure box and be back for round three very soon. 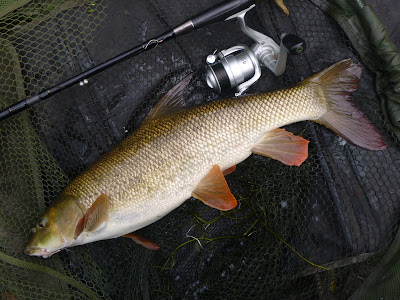 I did take some Spam as a backup & bagged the small barbel above. Blank saved - back to lure fishing - except... Another rod bites the dust! Can’t complain - I got my money’s worth out of that fishing rod! Another Rovex Lure Pro Quad ordered - £40 - should last 2-3 years?! 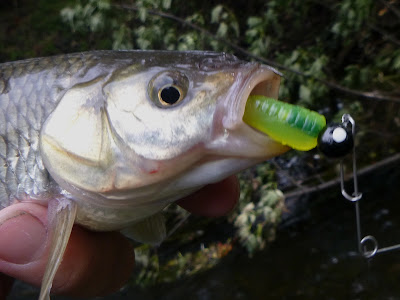 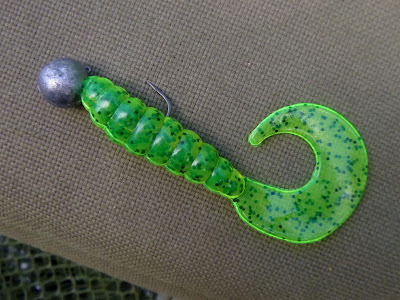 Unfortunately as I got the net off my back the hook pinged out (on examination the hook on the ultra fine jighead had straightened - I wasn't expecting to hook a barbel). So close to my first lure-caught barbel. Was it a fluke? I know people do target them on lures. Upgraded jigheads and Zoom Grubs added to the arsenal!
Posted by Brian at 05:07 4 comments: 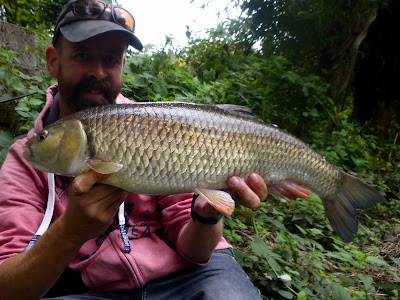 I've got the chub bug, so back to the river to float some crust about - two chub to 5lb 11oz - fantastic! All too soon I was out of bread... 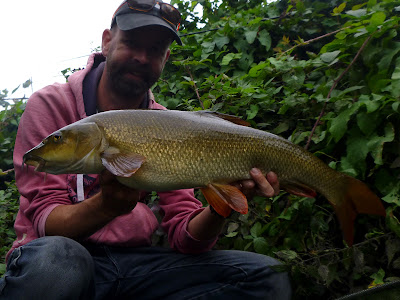 I had to use up some long past it's best luncheon meat - three barbel to 7lb 4oz mopped it up - ace! All too soon I was out of bait... 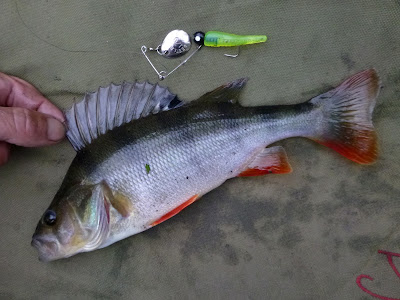 I popped a lure on for the walk back down the river - and bagged this beautiful little perch - brilliant! But all too soon I was out of time. 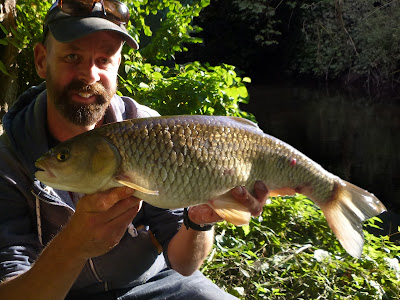 The best, and probably most exciting way of fooling chub in clear water is with floating crust. Chucking out a couple of free samples I followed them downstream waiting for the chub to reveal their location - then send one down with a hook in it - very simple fishing.

Watching the chub abandon their snaggy homes for a piece of crust I bagged 6 of them, the best two going 5lb 0oz and 4lb 5oz - great stuff - really should do it more often. And three barbel fancied a piece of floating crust - always great to pick barbel up off the surface! 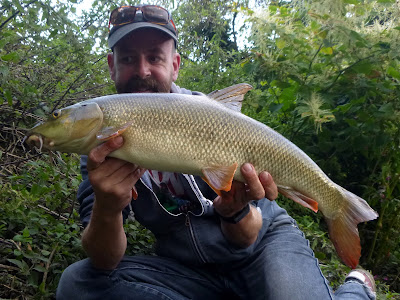 Ten years ago today...
I caught my first small river barbel - the obsession begins!
Posted by Brian at 05:56 No comments: