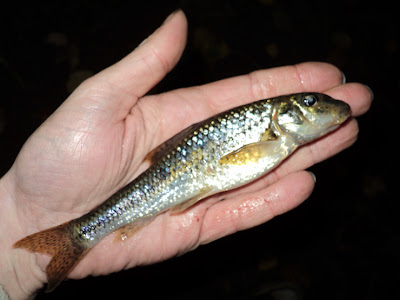 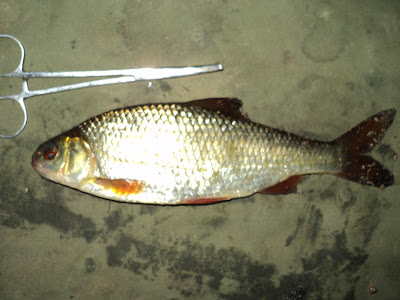 A couple of trips out in search of a roach this week, and I did manage to find a couple among the gudgeon. Best so far is a fish of about 8oz (bad photo above). I did however loose two, in two casts, both at the net, and both appeared to be well over the pound mark... It'll keep me coming back!
Posted by Brian at 17:52 4 comments: 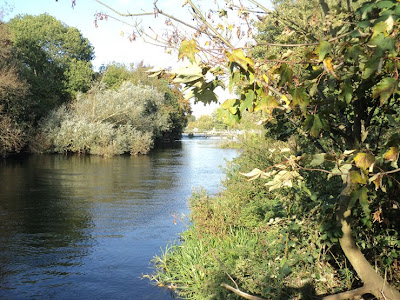 Another day on Penton Hook, and the early morning water looked great (unfortunately I overslept and was about an hour late). 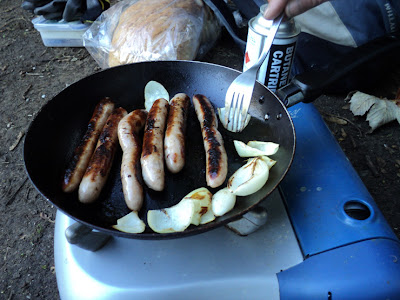 And riverbank breakfast was fantastic (although we forgot the brown sauce). 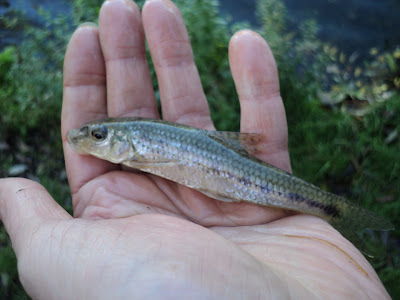 We started off feeder fishing, but all we could catch was gudgeon (a pike did have one off the hook). 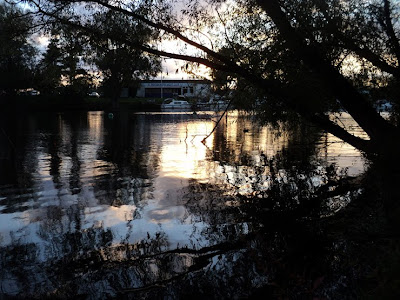 And then we pike-fished into dark without a run (but we'll be back).
Posted by Brian at 22:56 4 comments: 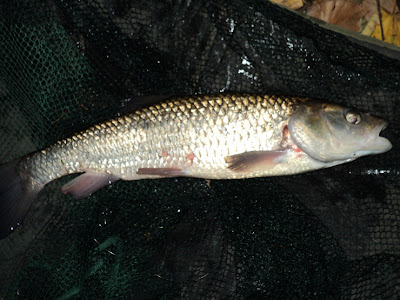 Quick trip to the river tonight to fish the first couple of hours of darkness. The barbel weren't playing but I did have an eel about a pound and a thin, out-of-condition chub of 3lb 0oz. When I unhooked the chub I found a second hook in it's mouth, the hook was barbed, connected to about twelve or 15 feet of line and then snagged - had this fish been on a 12 foot leash for some time?

I removed the hook and released the fish ready to swim about wherever it wanted and hopefully to gain some weight for the winter, but it made me think, do we need barbed hooks?

I know a few people swing past this blog so I was wondering; should barbed hooks be banned for course fish?
Posted by Brian at 23:45 9 comments: 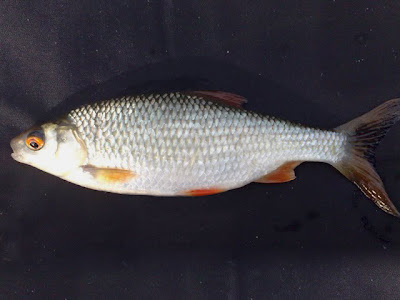 The temperature is falling and the Wandte barbel seem to be getting lethargic, October has seen 6 trips for 1 barbel so far. We are still getting the odd bites and we're still going after them but I'm adding roach and chub to my target species in the colder weather. I'd love to catch a pound plus Wandte roach!

The colder weather really makes me think of one thing, pike! And I'd love to get a few more before the predicted big winter freeze, my new target is to catch ten Penton Hook pike, and I'm really after a double...

Before heading to the Wye to continue my quest for a thirty...
Posted by Brian at 11:54 4 comments: 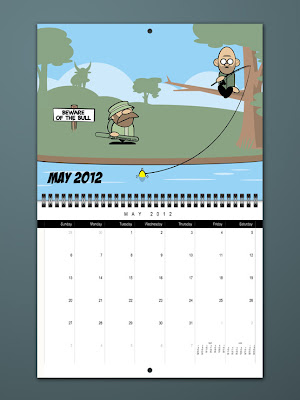 Jack & Bob have got their own calendar for 2012! Feel free to stick it on your Christmas list... Your fishing shed wall will look naked without it! 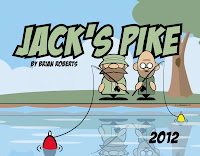 Available from Lulu, click here for more information and a full preview.
Posted by Brian at 17:24 2 comments: 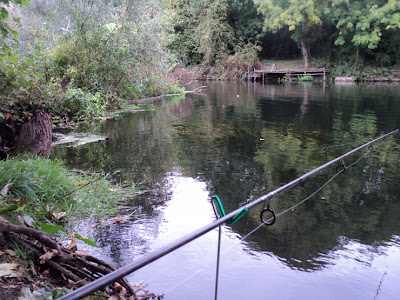 Yesterday saw our third eagerly anticipated trip to Penton Hook. Once the customary early start (4.30am), cycle, train, cycle journey was out of the way the early morning water looked great. We agreed on the usual £5 sweep on the biggest fish, although this time we agreed a minimum size of a 2lb fish (we didn't want it to go to live bait size).

Dan and Darren were after barbel, I was after a pike with my sights set on a double. The first spot saw a pike swirl as a tried to catch a live bait, a good sign. First cast I lost my bleak and a pike grabbed the stunned fish from the surface, they were feeding! The next bait was trotted back and forth, round the snags for hours and remained ignored!

Dan was getting bites on the meat and Darren was picking up small fish on feeder fished maggots. Several hours passed when Darren connected to a big fish, after a good fight if found a snag in the side and was stuck hard. He put his rod down and waited, eventually the fish swam out and the fight continued... Before the hook straightened out and the fish was lost unseen... What it was will remain a topic of conversation, my money is on a very big carp, but we'll never know... 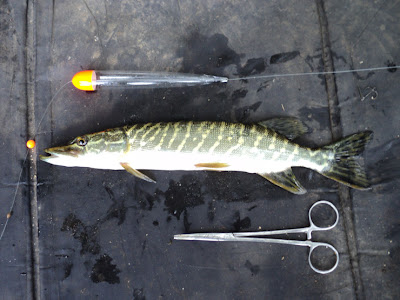 Then out of the blue I had a run on a float-fished bleak, I wound down and struck and was greeted by the smallest pike I've ever had on live bait, about 8oz. Next cast produced an instant run and an identical 8oz pike (not the same fish). Two pike for a combined weight of a pound!

Darren was still into the small fish, good dace, skimmer bream and small roach, but we didn't look like we were going to beat the 2lb bet limit. He did manage a 1lb 4oz perch, the best fish so far. So we stocked up on a few live bait and we all headed off to some new water for a couple of hours piking. Yay! 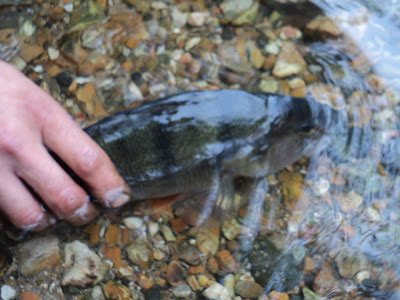 We found some pikey looking water, myself and Dan tried live baits, Darren tried a plug. I put a cast out to a feeder stream and soon my float started to bob, it slid under and I struck. The pike put up a cracking fight, and looked like a ten pounder in the water, an eight pounder in the net and a six pounder on the unhooking mat! It went 6lb 12oz, my new best from the Thames, and it looked like the £15 was mine! 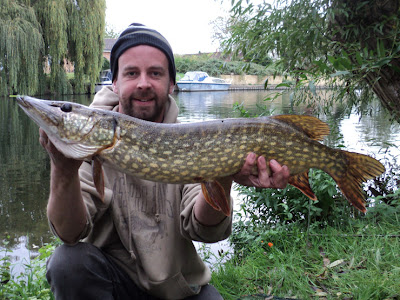 With time almost up Darren switched to live bait and had a run, my £15 wasn't safe, but somehow the pike bit through the line before Darren could hit it. I'd won, but more importantly I think we've located some more pike for next time.

We headed home again making plans to return. Next time I think all three of us will spend more time piking and exploring more water, I'd really like to see a double!

And hello to the guy we met who reads this blog, I'm sorry but I didn't catch your name. But it was nice to have a chat, and you recognising Dan as the barbel-double-man made his day!
Posted by Brian at 12:25 5 comments: 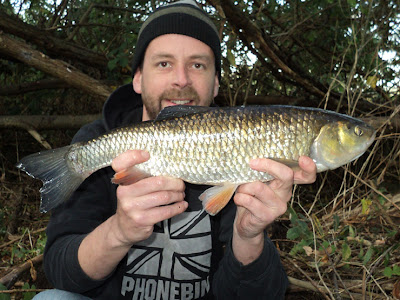 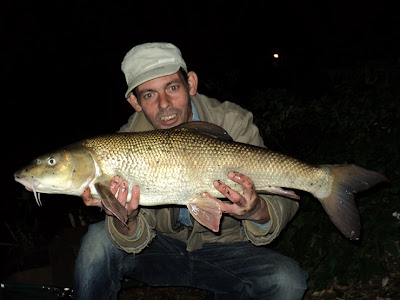 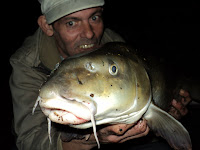 New logo developed for online fishing tackle company Harris Sportsmail by my company, Prawnsoda Design. It's great to design stuff for the fishing industry!
Posted by Brian at 12:08 No comments:

Email ThisBlogThis!Share to TwitterShare to FacebookShare to Pinterest
Labels: Design


Clip that was emailed to me. I've seen it happen a couple of times on the Wye, but never managed to film it.
Posted by Brian at 11:14 2 comments: 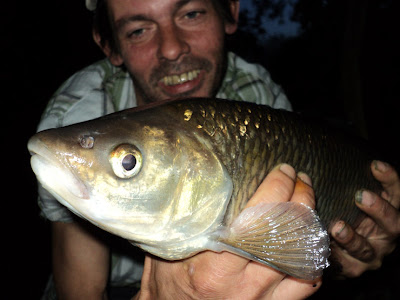 Yesterday was traditionally the last day of carp and barbel fishing for the year, or so they say, we just needed an excuse to hit the river for a bit of night fishing...

Weather is still hot and the river is still low and clear. Dan managed a 3lb 10oz chub (above) on luncheon meat... 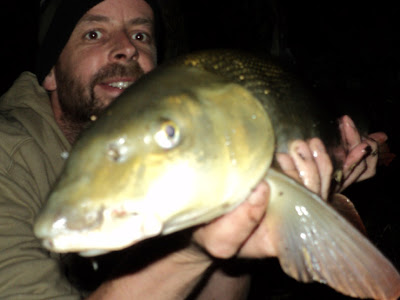 And I managed to tempt this 5lb 4oz barbel on our experimental new bait... Taking the challenge total to over 150lb...

Job done? No. As we were packing up Dan's rod wrapped round and he connected to a good fish, it bumped around then shot downstream, gaining freedom...

Ensuring we'll be back to try and catch it another day...
Posted by Brian at 00:51 6 comments: