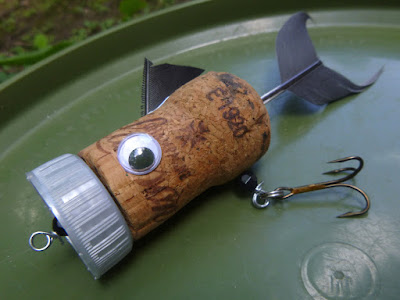 I like the idea of catching a pike on an old school cork lure so I've created Corky Mk2 based on my Taskmaster one.

The sharp beer bottle lid has been replaced with a plastic Diet Coke lid and a champaign cork body which is a nicer shape.

The wire runs right through the cork body, as cork is too soft for little screw in eyelets and I don't want to leave a hook in a pike. 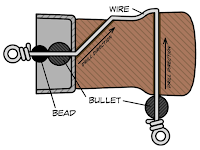 And who can resist a nice (if somewhat obvious) diagram?

And I know a shallow weedy pond to test it in when the season opens...
Posted by Brian at 11:17 2 comments: 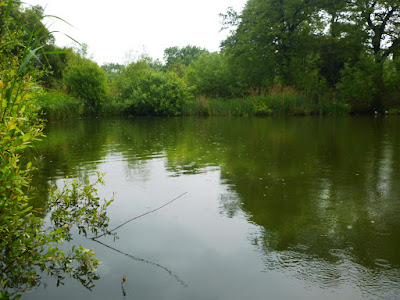 It’s the first time I haven’t been to a Star Wars film on the opening day since 1983. Sadly The Last Jedi killed the franchise for me, OK the prequels weren’t great - but at least we had a story arc, defined powers and even lightsaber duels (how did they forget that!).

Watching a film about slowly running out of petrol, crank phone calls and space penguins has pushed it too far. And I’m not alone, Streatham Odeon cancelled the midnight premiere of Solo due to lack of ticket sales... Come back George, all is forgiven!

Yeah, I will watch it soon, I really liked The Force Awakens and it’s pointless cousin Rogue One - and after a couple of days they tend to stop guarding the door - I’ll get an afternoon showing, with the cinema to myself for free! And take a couple of back-up beers!!

Instead I went to the carp pond for a couple of hours stalking, just one lost fish - I think the cold rain last night put them off. But it’s an excuse for a Last Jedi rant before I watch Solo. Expect the next rant when they announce Boba Fett: A Star Wars Musical...
Posted by Brian at 13:29 2 comments: 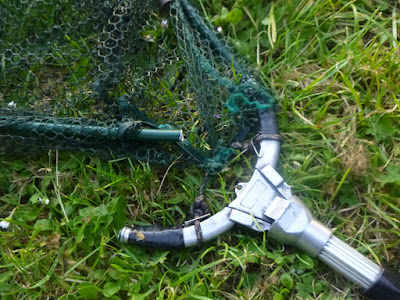 On the pond watching the dawn ready to stalk some carp off the top - and it didn't take long to hit a fish, careful fight on my scaled down 6lb line - and she was mine - delighted!

As she thrash about in the net one of the arms snapped - f*ck! It was only 5.30am and my day was done - but at least I had my prize, and on the unhooking mat she looked about 15lb - a big fish for this pond.

I dunked the weigh sling, zeroed the scales and as I transferred her from the broken net into the sling she thrashed again, slid off the mat through the reeds and despite a desperate grab she was gone! F*ck!! 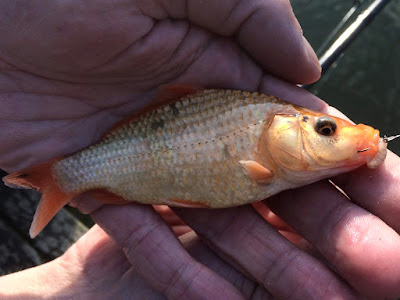 So I caught one of these... Baby ghostie? Goldfish/carp hybrid? Ornimental? Answers on a postcard please... 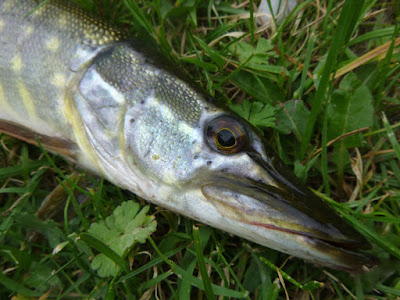 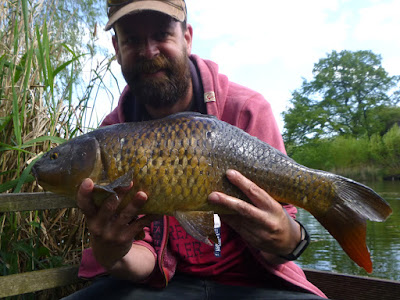 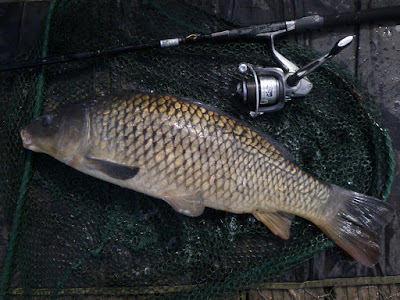 I added another small one but lost 4 others including an upper double - I think the line catches around pectoral fins and pings off when the carp changes direction - so next time I'm going micro barbed...
Posted by Brian at 10:24 5 comments: 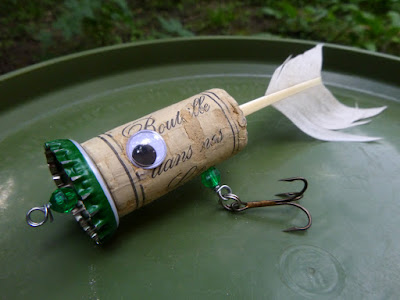 I was watching Taskmaster (Dave, Wednesdays at 9pm), if you haven't seen it a bunch of comedians are set tasks and are marked on how well they do, it's very good. The tasks are random and funny - but I thought it would make a better fishing program - examples below:
Edit: As Dave mentioned in the comments, it is too much like match fishing, I thought I'd add a few more tasks that are not:
Improved Fishmaster! So if you're reading this and you make TV programs send the royalty cheques to Brian c/o Pike Blog - thanks!!
Posted by Brian at 13:32 8 comments: 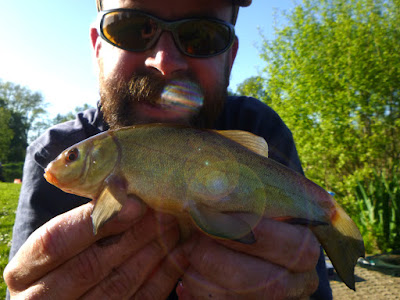 Same points system as before and after 5 hours on Harris Lake with one missed bite for James and two missed bites to me - we made the executive decision to abandon the match!

Me, James and Richard (James' brother) headed for Hill Pond, a match/training/kid's pond - no points or competition just some fun in the early summer sun. It was a good move...

And while everyone else struggled we were catching - nearly constant action. I had roach, rudd, 30-40 tench (including the mini tench above) and three crucians to 1lb 14oz - no better way to save the day! 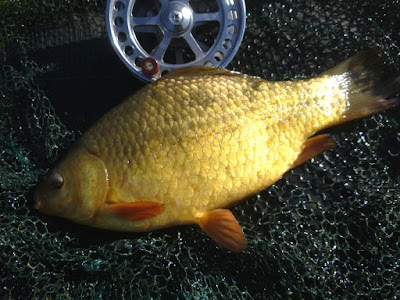 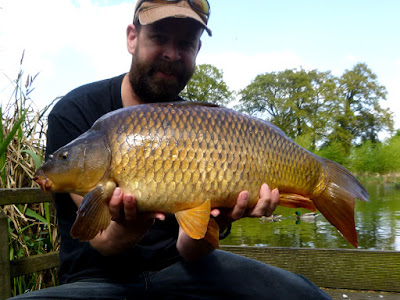 I haven't caught many carp, I counted up my doubles and it came to 16 (including today’s fish above) to a smidge over 20lb, from three rivers and three ponds. But I enjoyed catching a river and a stillwater carp for the challenge - time to add a few more.

I don't think I'm going to spend much, if any, time behind two rods with bite alarms - but stalking fish on a bit of bread crust is more my thing. And this 12lb 10oz beauty and a little splasher off the top was a great way to waste a couple of hours - I’ll be back...
Posted by Brian at 18:26 No comments: 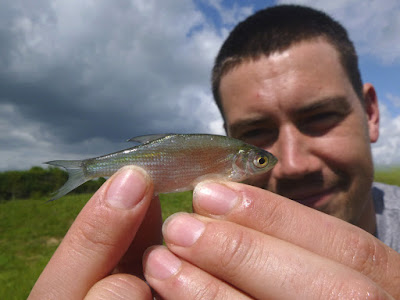 The whistle has blown, the points counted and it’s a massive congratulations to James who won this year’s Blogger’s Challenge! And also top work George for a very hard fought second place.

It was interesting to watch James’ pursuit of giant fish verses George’s more systematic approach. And I very much enjoyed George’s occasional commentary on the challenge as a whole.


Personally it was great getting out fishing for species I normally neglect, although if I enter the next one I’m going to have to spend more time on the canals - my poor canal total really let me down.

I tend to get obsessed with one or two species (normally pike and barbel) and I’m not one for sitting still, but the challenge has expanded my fishing - new locations and long forgotten techniques. 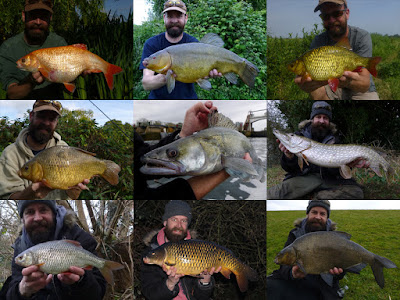 I know a lot of the guys don’t get much time on the water and have limited local venues, so I was lucky to have both. And I managed third place - bonus - I’m more than happy with that!

My full list of fish is here. But fish that spring to mind are stalking the orfe, beating my tench and crucian personal bests, my first Thames zander and poaching a river carp out of James’ swim - great fun!
Posted by Brian at 11:04 9 comments: