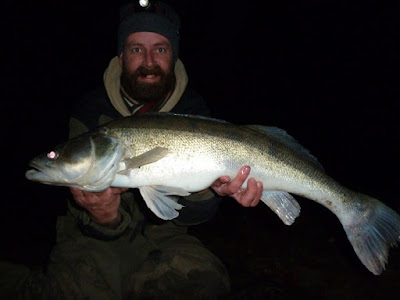 Third trip to Bury Hill this season, and the same as last weeks trip arriving late ready to fish into the dark. One change this time though - I was going to use Jeff's Lazy Rig on the ledger rod (with a tight baitrunner so I didn't loose a rod in the dark), the float rod would be fished the same as last week. And both were baited with roach slices. 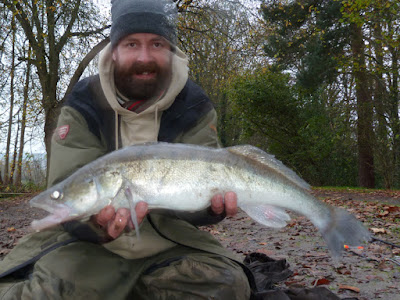 4.05pm, 3lb 12oz, float. It was a lot milder today and more cloud cover - we were off before it had even got dark - terrible photo though, camera was set to night.

I thought the action was going to be hectic but the baits remain untouched for an hour and a half, not knowing a great deal about zander I did an old pike trick and brought the float right into the margin just off the reeds. Where it sat for about 3 minutes before charging off.

Not a great fight but the fish stayed deep, I only got a brief glance as she slid over the net - and I really did think double - 5.40pm, 9lb 1oz, float. What a stunning fish and I'd smashed my PB (lead photo) - man they're big for their weight - and I was over the moon! 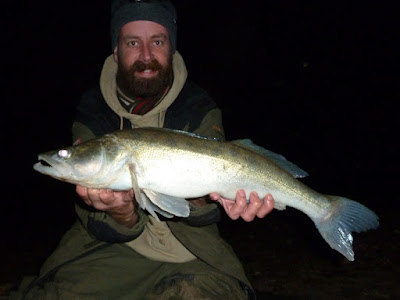 6.00pm, 4lb 0oz, float. Under the rod tip again - they were in the edge. Next I brought the ledger rod into the side as well. 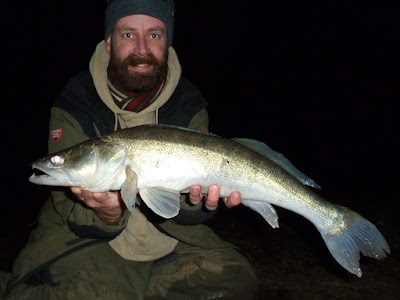 6.15pm, 4lb 10oz, lazy ledger. The Lazy Rig was away, but I didn't have to rush over and strike the fish was already hooked and pulling against the baitrunner - I strolled over and joined the fight! The circle hook was around the bottom jaw at the scissors - not hooked more trapped - and easily unhooked with fingers. This seems the perfect way to hook zander.

Except a run on the lazy lead 5 minutes later failed to hook-up. And then one about 10 minutes after that also failed. I spotted the problem and could have kicked myself - I only had size 8 circle hooks, the first bait had been really small the next was too big - the bait was sliding out of the mouth without the hook having chance to take hold. Size 4 circle hooks added to the shopping list - and a smaller bait added to the hook. 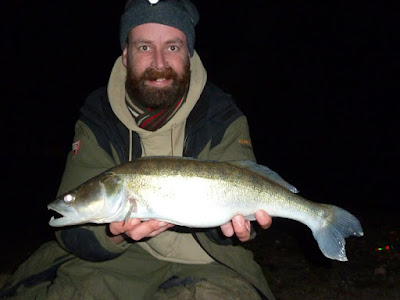 8.05pm, 2lb 15oz, float. But they had moved or they had stopped feeding - I gave it another hour and a half but the baits remained untouched. As I was packing up the ledger rod I glanced over to see the float slide away - zed number 5 and the smallest of the bunch.

Another brilliant trip was in the bag - and a cracking new PB - a nine pounder - fantastic!!

Edit: Jeff's post about the 'Lazy Rig', circle hooks and skull-holes can be found here. Very interesting!
Posted by Brian at 23:19