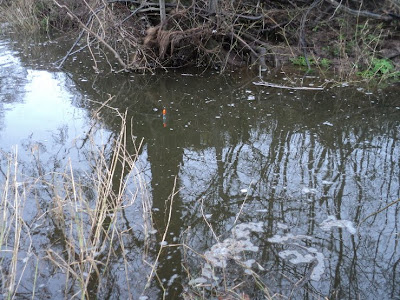 Well it's raining and the river is starting to rise again (pretty rapidly this evening). But spurred-on by Steve's success yesterday & the fact I'm running out of time this trip, I got the wet weather gear out and hit the river.
A long walk this morning to fish some seldom fished River Wye, but the river was already too high. I started float fishing in the slack bays and feeder streams, but soon I swapped to a ledgered sprat and worked my way back upstream.
Nothing until the last spot, a run and a great fight in the dirty water - I didn't see the fish until it was at the net - where the hook pulled. The pike briefly savored it's freedom before darting into the waiting net, what luck! 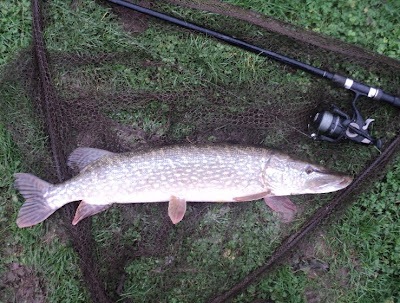 Quick photo in the net (nobody was mad enough to accompany me today). 10lb 6oz, a fish on the bank is always a great day!
If you're wondering why I didn't head back to the same spot as yesterday; it's normally a no fishing stretch - we had special permission yesterday.
Posted by Brian at 17:16 4 comments: 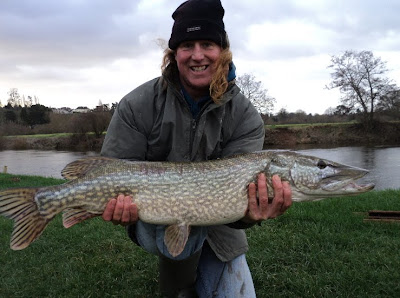 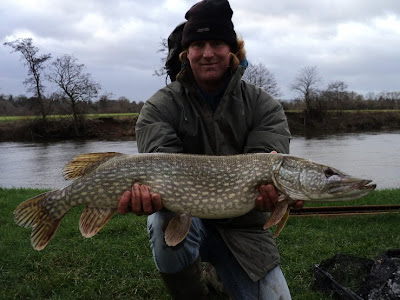 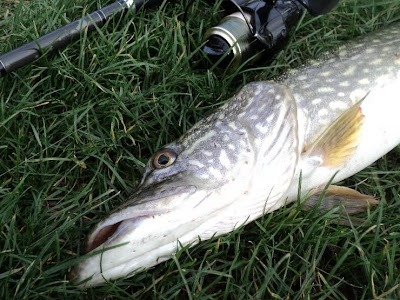 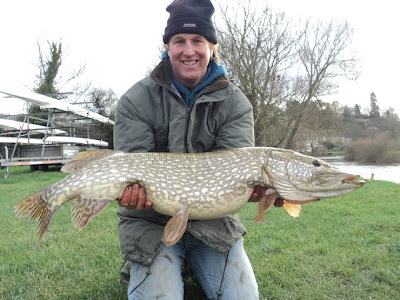 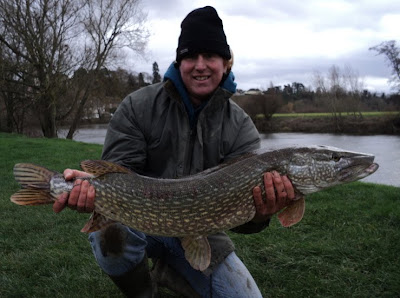 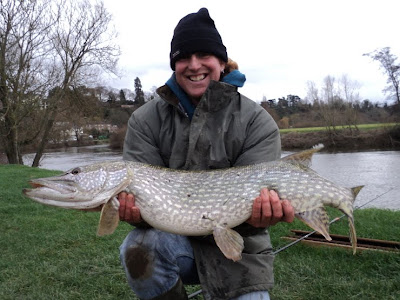 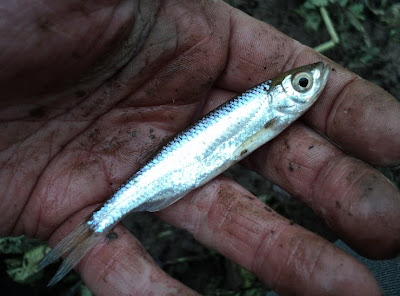 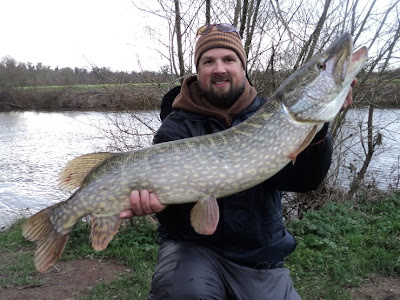 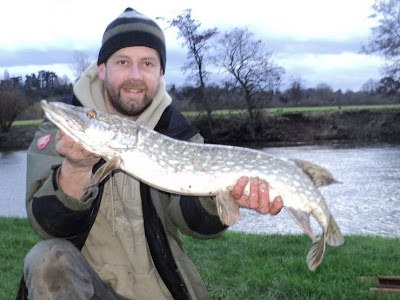 And me - it just wasn't my day. One run late on and a recapture of the 5lb 8oz pike Steve had caught earlier. If I had to recapture one I'd have preferred it to be the twenty!
Posted by Brian at 19:18 9 comments: 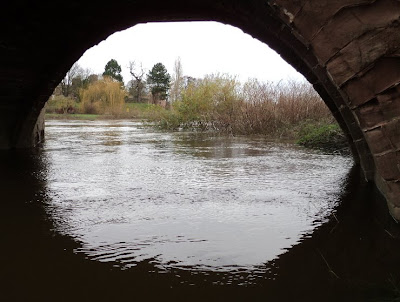 The river has been bank-high since I arrived on Friday... And it was still a bit high today, but it's my birthday and I fancied an afternoon crack at a Wye pike. 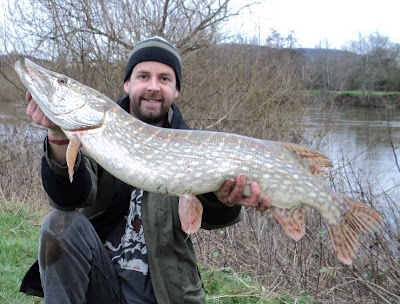 I was first up into the action with a 13lb 4oz fish on a ledgered sprat. A couple of hours passed before Roger had a 5lb 0oz pike on float-fished bleak. I then lost a low double at the net (ledgered bleak) and another fish unseen (ledgered sprat).
We did have a lot of dropped runs, I don't think there was anything wrong with the set-up, perhaps a bit lower water and they'll feed a bit more positively... Thursday... Fingers crossed! 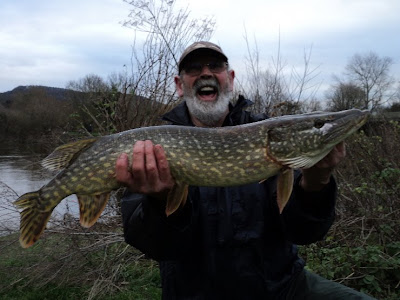 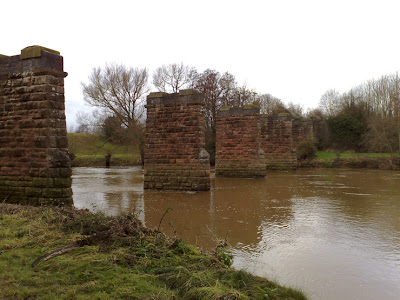 If you've read this blog before you know I believe in luck. My fishing is almost entirely based on luck, sometimes I have it, sometimes not.

But a bit of preparation doesn't hurt, and predicting the river levels is one way to do it. Unfortunately it's not always good news - but sometimes you can spot a day or even a few hours when you think the fish will feed.

My trip to the River Wye this Christmas is set in stone, visiting my parents, brother and family are flying over from the States - but I'll need to escape and go pike fishing - once or twice...

So using the BBC weather website and the Environment Agency website I can monitor the water levels. And by watching how the five day weather forecast effects upstream levels and tracking it down the river I can see what's going to happen 5 days in advance... Well, that's the theory anyway...

The links above are mainly for my own use as they are bookmarked on my computer in London.

I've watched it for a couple of weeks and I think I'm getting the hang of it. Best pack my lucky hat just-in-case!
Posted by Brian at 11:45 2 comments: 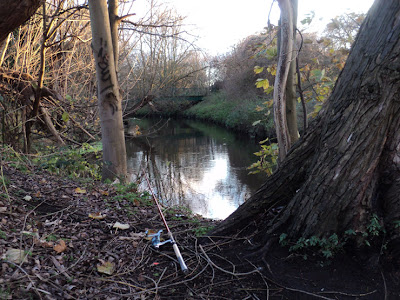 A trip to the Wandte today, the last trip of the year. I was planning on making a day of it, but I had to work this morning, so we didn't hit the river until 3pm.

Our chosen target was chub but they weren't playing today, the only thing interested in the luncheon meat was a friendly robin (below). We fished into the dark, but freezing temperatures and sleet drove us off the riverbank, fish-less, just after five.

We'll be back in January... 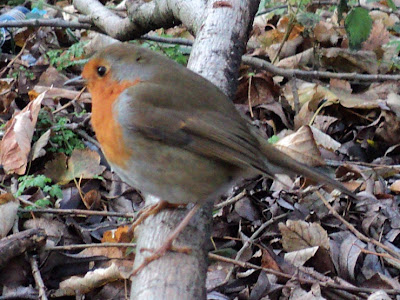 Jack is famous! He's appeared in the paper alongside angling legend Ivan Marks and artist Maurice Pledger - thanks Bob.
Posted by Brian at 09:57 1 comment: 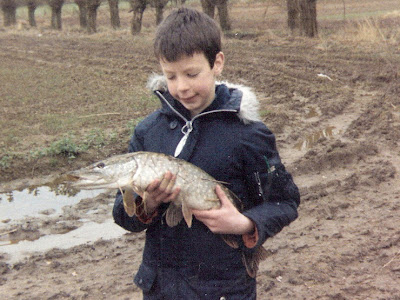 I was fishing with my dad. I had already caught my very first pike a couple of weeks ago and was desperate to get another one before the season ended. I trotted a dace live bait across the deep hole at the Brook Mouth and hooked into the tree at the bottom of the swim...

The bait was lost and a piece of bark was attached to the hook, as I wound it in a pike swirled at it. The excitement was almost unbearable as dad put another dace on the single treble hook...

I cast out and just as the bung settled it shot under the water. I remember my dad telling me to give it a few seconds but I was already striking...

An epic battle ensued, the only part of the capture I can't really remember, but soon the pike was gaffed gently under the chin...

A five pounder, a monster, photographed on film that would take an age before it was developed. To the utter horror of the match-men I later told, I slipped it back, hoping to see it again the following year...

I can't remember the year or how old I was, but I can remember every other detail. Details I reported back to my mum, brother, teachers and friends for the weeks (months) that followed.

Can't wait to go piking with my dad and brother at Christmas!
Posted by Brian at 09:37 5 comments: 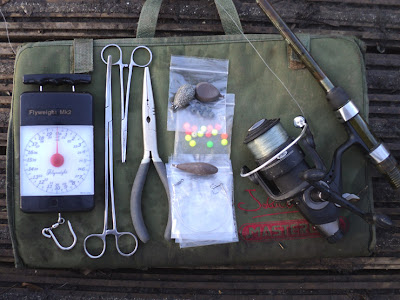 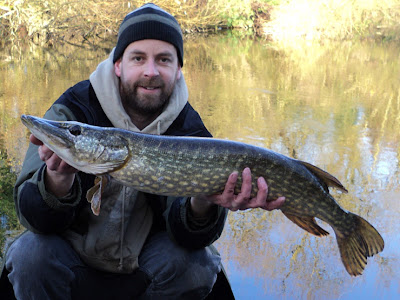 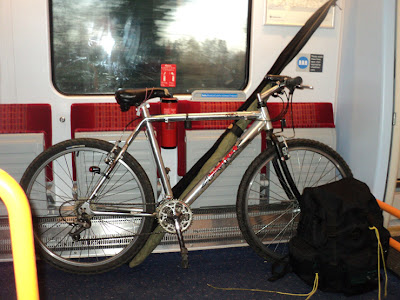 Edit: I've just noticed this is a recapture, it's the one that bit me two weeks ago! Nine ounces heavier this time, perhaps they have been feeding like mad for 2 weeks which would explain why they aren't hungry today. Or I could have messed up weighing it - does look fatter in the photo though.
Posted by Brian at 16:47 9 comments: 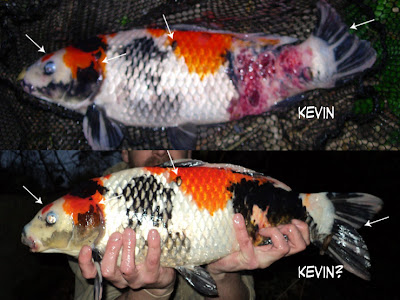 Was the new koi Kevin? Here they are next to each other, so yes. OK, they are about a 95% match, but the distinctive spots near the eye and the black scale mid-back (among others) confirm it. I'm not sure how the patterns change over time (or when the top photo was taken - Stu?). But I'm glad to see that nasty damage on his left side has healed well.
Posted by Brian at 19:56 5 comments: 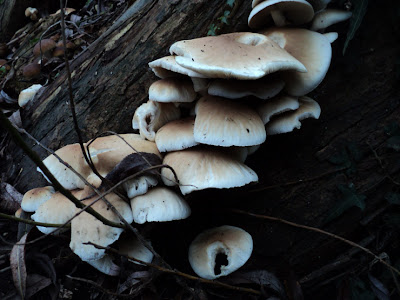 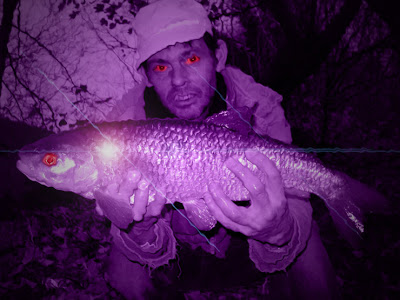 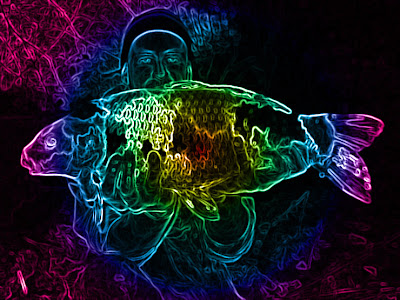 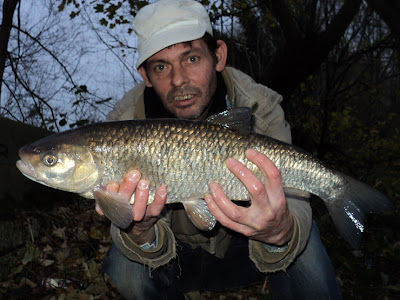 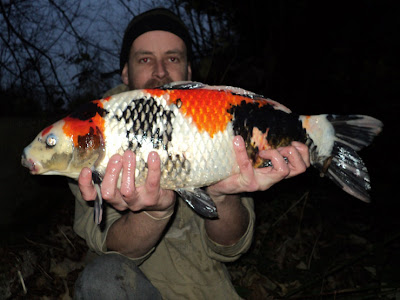 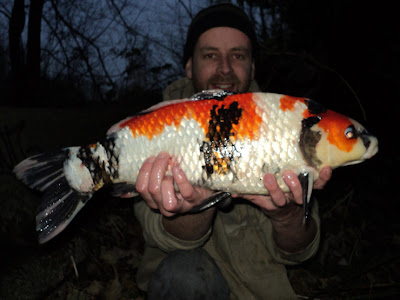