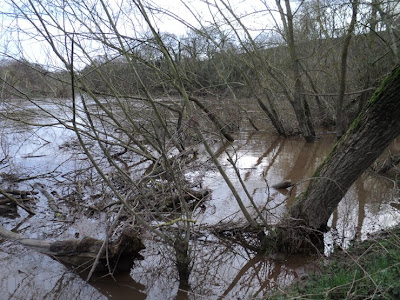 Unfortunately I was right, the water was rising and this morning there was about 5 foot of extra water on the river. And unsettled water levels mean the pike don't tend to feed. Myself and Roger still gave it about six or seven hours in a few spots that have produced the odd pike at these levels before, but no fish showed.
My luck hasn't really been in while fishing the Wye this season, most sessions have either been cancelled or aborted due to the water conditions. I've managed just 3 successful sessions for 6 pike. My Wye season really was saved by the twenty on Friday - one fish can make a season!
Sadly that's it for the Wye this year, next year I'm going to have to start earlier - perhaps a session or two in September and/or October to beat the winter weather.
No photos, no USB doohickey, no pike! Flood photo added!
Posted by Brian at 19:01