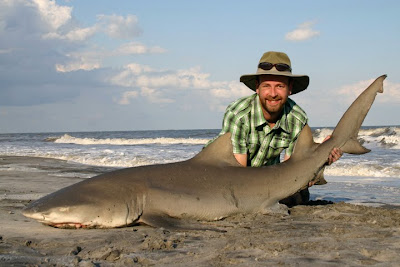 First day of shark fishing in Georgia... Pre-session started with a traditional American lunch, the McDonalds drive-thro, I had the McFatty burger with large fries... Blah... Long story short, I got a shark!! Yay! 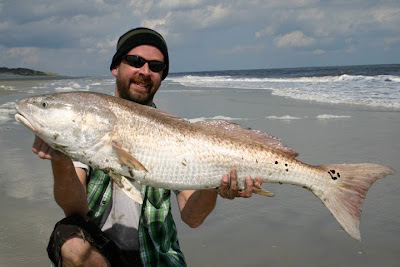 We decided to have a couple of hours at one of Paulos' favorite shark spots. Bait was fresh mullet caught with a casting net. Paulos soon put me in the action as one of the rods bent over and I connected to the red drum above, what a cracking fight, and I think the smile on my face says it all.

Next the second rod bent over and I caught a stingray. It was a very different fight, apparently you have to keep them moving as once they stop they bury themselves in the sand. 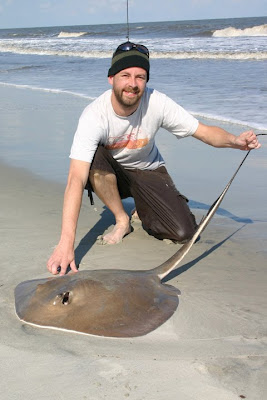 I didn't like the spike on it's tail whipping around!

We were now well over our intended two hours but the baits went back out while I *helped* Paul catch some mullet for bait (I'm not a great casting net thrower!). The second rod bent round again and soon I was connected to another fish. Paul said it was probably a big stingray but once it was in the surf he told me it was a big lemon shark, the smile on my face nearly hit my ears! It was 6' 7 1/2" (about 150lb) photo at the top. 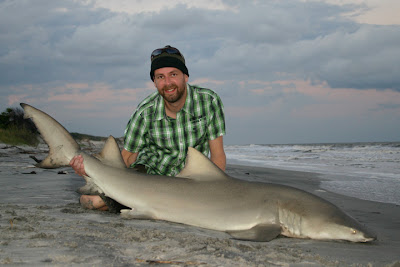 The rods went out one more time to see if there were any other sharks about, and while I was still trying to recover from the first fight the rod went over again. It was the hardest fight of my life, by a long way, it took well over an hour before I got the fish within Paul's reach. She was 6' 4" - two six footers in one day. Top work and thanks to my ghillie Paulos... I quite like this shark fishing..!
Posted by Brian at 02:45