It's Cold Out There 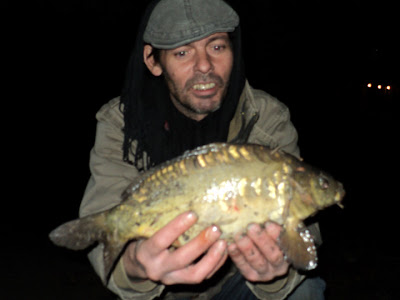 While I have been away Dan has been busy, he has been baiting a swim on the Wandte every two days and upped the barbel target to 2lb 8oz, then on Monday night he had a 3lb 1oz barbel and is convinced there are bigger fish there. Unfortunately the photo wasn't great as the flash on his camera failed - after all this effort I didn't want our biggest barbel to go unrecorded, and I didn't want to lose the £10 bet I have on who catches the biggest Wandte barbel.

So despite the cold last night we went fishing. We had a few half-hearted bites, but I think the frost in the morning and the dropping evening temperature had put them off. The session was saved by a solitary mirror carp to Dan, it was the same fish he caught on the 16 September and this time we had scales, it went 2lb 5oz, another really fat river carp... After barbel, at night, at this time of year? We must be mad!

Time to dig out some warm clothes and see if Esox wants to play. The first venue is going to be the Thames, it's a big river and lacks many of the obvious pike-holding features of my home turf River Wye, so tonight we are going to brave the cold again and put out some marker baits.

Speaking of the Wye, the first twenty of the season made an appearance yesterday... I'll be heading there soon.