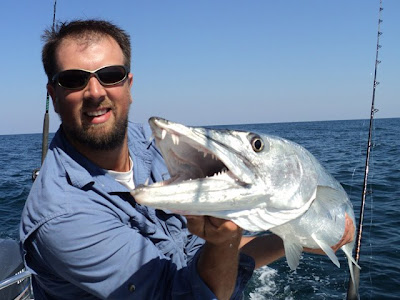 With a few sharks under the belt, we hit the open sea off Savannah today to go after another fish I've always wanted to catch, the barracuda.

The initial marks we tried produced black sea bass, red snapper, a trigger fish and an octopus but after a bit of searching we found a promising spot near a tower 36 miles out to sea. We could see the barracuda attacking the bait fish and we able to sight-fish for them, casting to them and as they went to investigate the bait we began to pull it away inducing a take. Free-lined live bait did the trick. 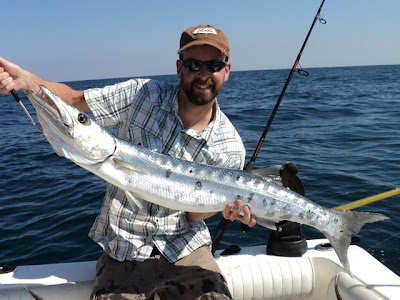 The fight was spectacular with deep dives and aerial jumps, one of them managed to get about 10 foot of air - wish I'd filmed it! We ended up with 6 fish to over 20lb. (Some of the photos didn't come out due to rolling boat). 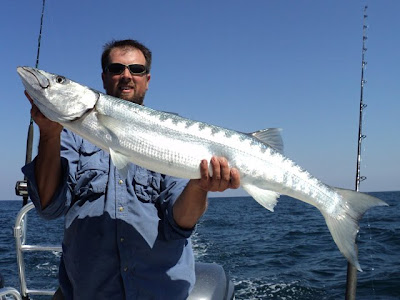 Paulos with the best of the bunch.

Despite the use of a gaff (horrible thing) all the barracuda were returned alive and unharmed to the water - some of the black sea bass weren't so lucky... They are dinner tomorrow. 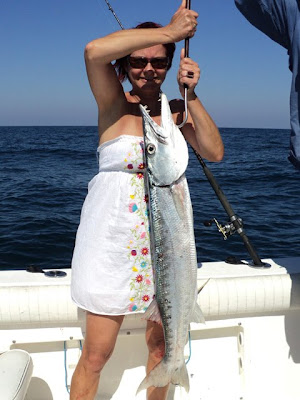 TC got in on the action.

On the way back we couldn't resist a quick try for a shark, so we followed a shrimp boat with float fished deadbaits - just one run which I hit, but the shark was only on for about a minute before it jumped and broke the leader. 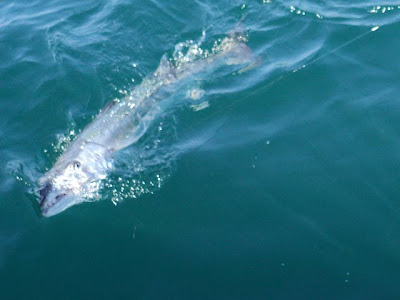 A barracuda in the clear water.

I massive thanks to Captain Chris and Team X-TA-SEA for taking us out for the day - top fishing guys!
Posted by Brian at 03:19