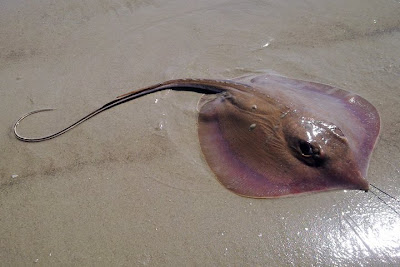 Small stingray, but we saw his big brother...

After a day off fishing we hit the beach this morning, and it looked perfect, nice waves, light breeze, slight current. This was confirmed when the first cast connected with a stingray about 30lb, unfortunately the hook pulled just as we were about to beach it.

Then the breeze stopped, so did the waves and the current, it was like a lake... Which is great if you are fishing in a lake, you need a bit of rough water for sharks... The action stopped. We caught a few blue fish, whiting and loads of small stingray (photo of one above). It was fun and kept us entertained while we waited for something bigger.

Several hours later one of the shark rods began twitching, we waited for it to run, when it didn't I hit it anyway, one of the smallest lemon sharks Paulos has seen - but it was a shark - and I loved it! 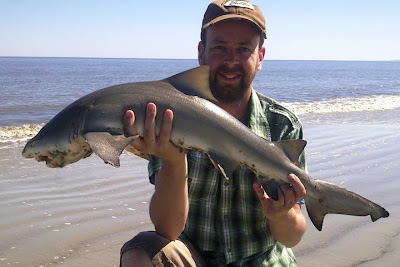 A couple of hours passed and one of the rods kicked over, I was into a better fish. The next rod down kicked over and so was Paul. A double hook-up of red drum, both went 41" although Paul's was a stockier fish. 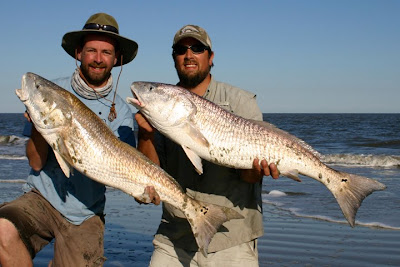 We thought the bigger fish had moved in but that was the end of the action for the day. Tomorrow we're all off for a look round Savannah then we'll probably go after some Florida sharks...
Posted by Brian at 03:40