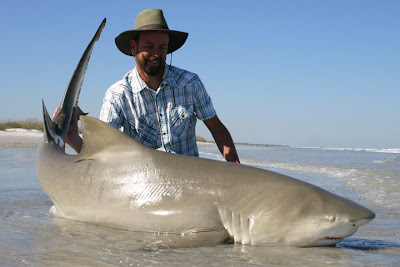 Well I'm back in London and reflecting on a fantastic trip. I caught a total of eleven sharks, three of which were over six foot, to 6' 11" (above), three big stingray to 75lb, three red drum to 42" and three barracuda to 20lb... Not to mention the other species; black sea bass, small stingray, a trigger fish, blue fish, whiting, a clearnose skate and an octopus (well, nearly).

It wasn't easy fishing and we put a lot more hours in than the blog seems to reflect, but it was more than worth it. It wasn't only the fishing, it was the great locations, the wildlife and the other aspects of catching sharks, landing them, unhooking and releasing them.

So it's a massive thank you to Paulos, Brooke and Sammi for their hospitality. And a massive thanks to Paul's ghillie skills. I don't think I'll read the Shark Blog in the same light again... Now I've experienced it I'll be very envious of every post! 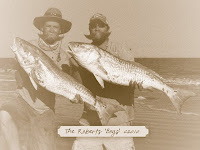 So would I swap? Surprisingly no, I'm sure there is a River Wye 30 pound pike with my name on it, and until we meet my quest continues...