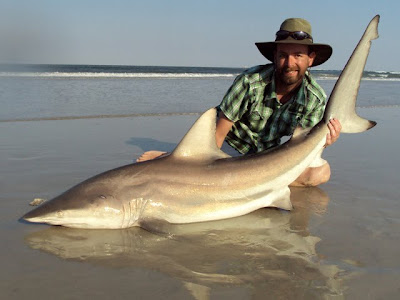 We ventured south to Florida this morning, we started fishing an estuary under a bridge - an ugly place to fish but there were plenty of bait fish and lots of jumping tarpon - so we gave it a try. Brooke was into a 17" trout before anyone else had cast out (it came home for dinner). She followed shortly by a 32" blacktip shark, but then the tide turned and started going out and the fish disappeared. 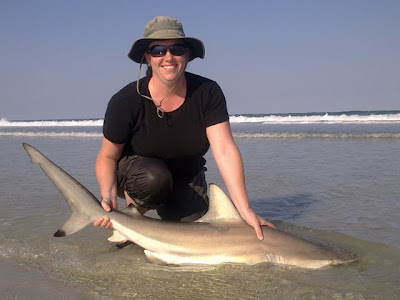 Next we moved to a large beach and fished over some sandbars, again Brooke was the first to hit a fish and landed a 4' 6" shark on legered live fingerling mullet. Next it was my turn, the rod pulled round and I was into my first blacktip shark, the water on the beach was gin clear and during the fight I could see the shark swimming through the waves - fantastic! It went 5' 7" and weighed about 85lb (top photo).

I cast out another mullet chunk and was soon into my second shark, this time it was 4' 6 1/2". Paulos decided that the only process of shark fishing I hadn't done was unhook one - so with pliers in hand I opened it's mouth and as with all the sharks we've caught it was hooked in the bottom jaw just behind the teeth... Umm, simple! With my new found confidence, and despite being warned it was dangerous, I decided to hold it up for the photo. 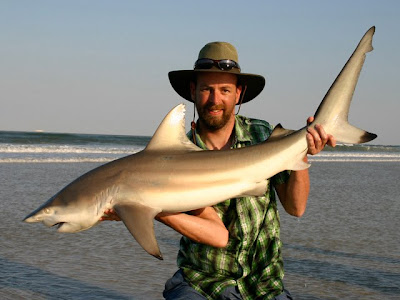 Please don't twist and bite me!

Next Brooke was into her third shark of the day, I realised I hadn't landed one for someone else, so when it was beat I waded out into the surf and grabbed it by the tail and pulled it onto the beach - OK, I jumped back a couple of times - but it was looking at me funny! The shark was 4', I did the unhooking - I wonder how my confidence will be if I'm faced with grabbing or unhooking a six or eight footer? 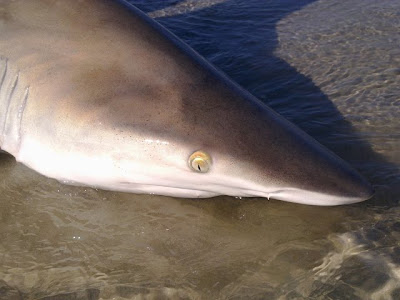 And with that we had to go... Hopefully back to Florida tomorrow...
Posted by Brian at 04:28