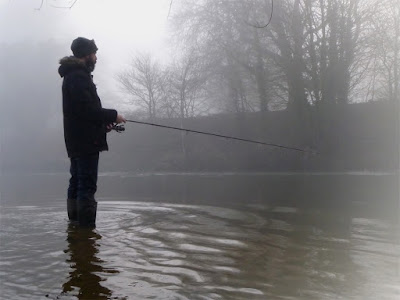 It's all over for another season, and as always it seems to have flown by. It was the year of the Specimen Challenge, and seven new UK PBs were added - plus shark, stingray and red drum!

It was a bit light on pike and I didn't even fish for zander, but there was some cracking fishing. I fished 14 rivers, exploring some beautiful locations and caught some stunning fish. Quick look back below.

June: It was a funny start to the season; the weather was all over the place and the fish hadn't spawned. I started my challenge with a PB bream from a chalk stream, then resulted to a few local barbel fishing sessions - although barbel were not the really target this season. The highlight was a new local river PB roach, 1lb 4½oz.

August: The plan was to crack on with the Specimen Challenge and my targets were crucians and rudd - but work had other ideas, I struggled to find time on the bank and when I did conditions were against me. I managed the target species but not the target weights - next year? (I'm going to extend the challenge).

September: More time on the bank and more fish in the net. I stalked out a double figure river bream, at 10lb 9oz my target was cracked. An old warrior of a barbel, at 9lb 14oz I really didn't care about those two extra ounces. A new PB chub at 5lb 14oz. And rounded off the month with some trotting for dace, great fun.

October - UK: Started with a trip to The Royalty in search of pike - landing three but not the double I was after - next time? A couple of trips to the local resulted in some chub and barbel and a monster 18 gram minnow (I was genuinely targeting minnows) - at 75% of the British record it earned a place on my PB list!

October - USA: I thought hurricane Matthew had destroyed our shark fishing adventure - dirt, debris and a big drop in water temperature. I needn't of worried with Paulos on the case; me and Roger managed 24 sharks, three 6 foot plus including a 7 foot new PB. As well as a PB stingray and 18 red drum to a new PB of 44'. Brilliant!

November: Back to reality, briefly, before hitting a new PB grayling of 2lb 11oz on my first cast in The Frome - it's better to be lucky than good! I then turned my attention to a roach shoal I'd spotted in the summer, landing 8 pound plus fish (including a recapture) and upped my PB twice to 1lb 15oz - so close to my target.

December: One reason or another kept me off the river most of the month, just one trip out chasing Stour jacks. Over Christmas I hit The Wye but it was tough going - two pike, 10lb and 14lb. Steve landed one of 15lb and I found myself unhooking a twenty for a couple of kids. And I can't wait for a bit of mild weather fly fishing!

January: An apathetic start to the year was replaced by some quick chub and barbel missions to the local river, not specimen hunting, just getting something to pull the line. I also cleaned up my uncles' old reel - something I've been meaning to do for a while. And filled my boots with River Itchen grayling - apathy banished.

February: Started with my best bag of dace for years, nine fish over 8oz and a new PB of 11¼oz. A trip to a little chalk stream produced a beautiful ancient roach among the grayling. And in a few smash and grab missions I landed chub to just shy of five pounds and barbel to double figures - my first double of the season.

March: The final push and I took my total local barbel to 70 fish, including a double (recapture). I landed a stunning pug nose pike on a lure from a tiny chalk stream, and landed a new PB rudd on the last day. But my fish of the month, and in fact the season, was my monster 6lb 12oz chub - what a fish! What a season!!
Posted by Brian at 08:56