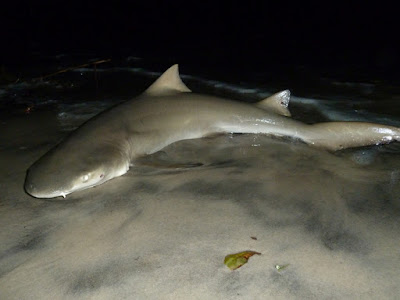 With flooding tide and strong winds Paulos knew of a 'beach' that might be ideal. The beach was a strip of sand about 8 foot wide, ocean in front and a swamp behind.

That's; hopefully sharks infront of us, probably alligators behind us and possibly rattle snakes on the path in between. We needn't have worried - it was the mosquitos that were trying to eat us alive! 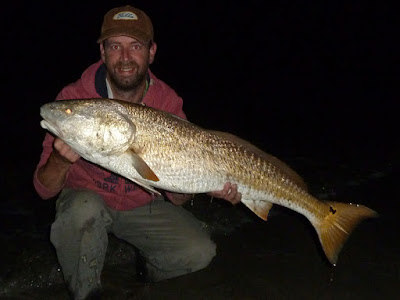 Starting fishing well after dark it didn't take long before I hit a shark, another little one, but this one was a lemon shark - one of our target species. We're hoping the bigger ones are in the open water - and hoping we can get on them soon.

The only other action was from a 42' red drum, not a bad shark substitution, really like catching these - the barbel of the sea - man they fight!
Posted by Brian at 13:53