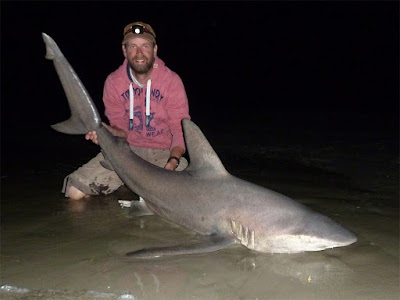 We were on the beach to fish the low tide at midnight, it looks like the nocturnal sandbar sharks are our best big shark option. Not a touch for the first hour or so but then the rod baited with a whole bluefish head hammered away - the nightlight shooting out across the water.

After a 200 yard run I set the hook (you can't set the hook until they stop), then began a brilliant 40 minute fight in the starlight. Long runs left and right with lots of angry head shaking before Paulos collared him in the surf and dragged him up the beach.

A 6" 6' male sandbar shark, not as bulky as the females but all muscle - well worth the late night!

We quickly followed him up with a small sandbar shark and a small sharpnose shark to Paulos. Then as suddenly as they had arrived they disappeared - the rods remained motionless for another hour or so before we called it quits.

With the weather set to change I'm really hoping to get another trip or two in - fingers crossed...