Lemon In The Surf 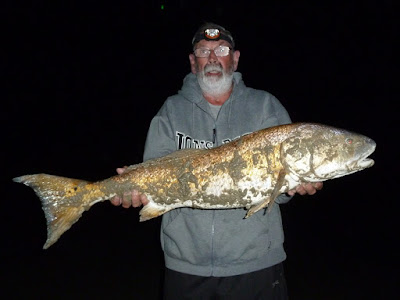 The weather was cooler, the skeeter activity had died down and we were on the beach to fish the low tide. Two heavy shark rods were cast and we were setting up the red drum rods when I glanced over, one of the shark rods was away. After a good run I hit the fish and nothing... How does that happen?

The rod was rebaited with fresh stingray, cast out and soon away again - same story, I missed it! Over the next hour the same rod was away 3 times, Paulos missing two fish (at least it wasn't just me) before Roger finally hit one - fish on!

We wound in the other rods and were set for an epic battle, and after hammering out to sea Roger worked the shark back into the surf, in the spotlight we could see it was a good lemon shark, six foot plus - then the hook pulled - f&$k!!

That was the last of the shark activity but both Roger and myself landed a consolation red drum at 37' and 39' respectively. We'll be back for those sharks tomorrow... 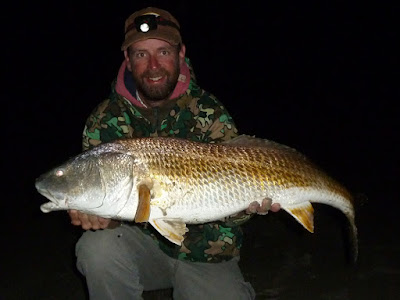