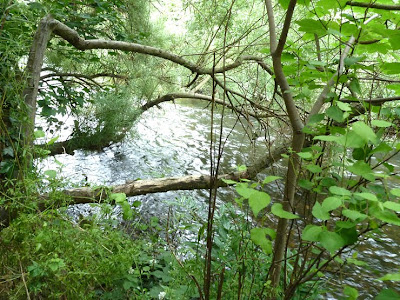 Well I skived off work, it was sunny and there was way too much on my to-do list. Following the advise of fellow blogger Stew from Barbel Quest I went in search of a roach. And I found them, it took about half an hour of feeding before they became confidant, then it was a roach a chuck.

No big ones, but I probably had a couple of dozen to about 4oz, I'd have happily sat there all afternoon catching them - but unfortunately my center pin seized up solid (cause yet unknown). As I had to break the tackle down to change reel I thought I'd put on some slightly heavier gear and go in search of a trout. 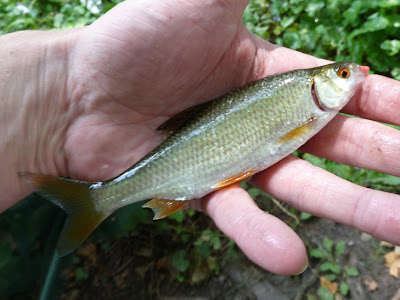 My trout radar was on top form, although basic fishing skills had left me - hooking and loosing 3 trout in quick succession! I did manage a small chub, which looked like it was the only one hanging about with the trout.

While wandering about I spotted the odd carp in the shallow water, every time I did I'd chuck half a handful of maggots at them to see if they wanted to play - they didn't! Then I spotted a carp and barbel lying next to each other, both looked like doubles - half a handful of maggots went out and they both wanted play. (There isn't supposed to be any barbel in this stretch).

I crept upstream, removed the float and all but one of the split-shot and put a bunch of maggots in their path. After five minutes I was thinking of popping down to see if they were still there - then the rod hooped round. The carp shot past me, I must be connected to the big barbel - it was at this point I remembered I was using 4lb line and a size 14 barbless hook.

Cracking fight - why did my center pin break? And eventually an unexpected 9lb 1oz barbel was added to the challenge! 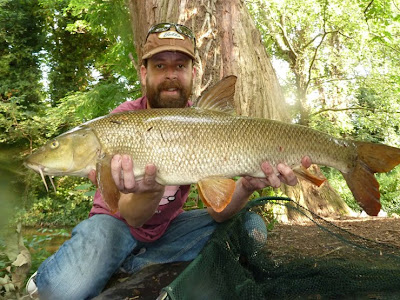 Running out of time (I had to be at a birthday party) I headed back to the roach shoal, and this time it was a better stamp of fish, 8-10oz, I'm sure there must be a pounder there - next time I'm bring bread!

Right then; fix center pin, clean barbel slime off camera lens and catch up on work... Or I could go fishing... 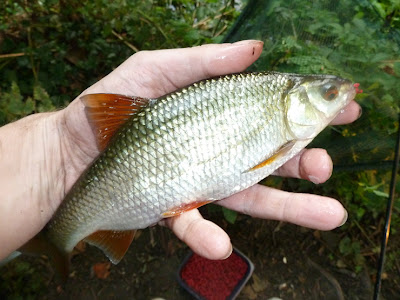