River On The Edge 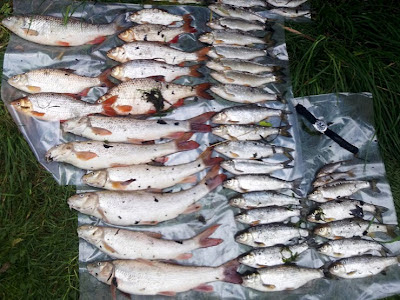 On 17 September 2007 a chemical was accidentally flushed into The River from Thames Water's Beddington sewage works, the company failed to notify the Environment Agency, and the pollution washed downstream killing a reported 2,000 fish.

The company said they were 'mortified' by the incident and met with local clubs and charities to discuss restocking the river. Translation: We need some photos of local school children releasing baby trout into the river as soon as possible.

The company was fined £125,000 for the incident, although when the publicity had died down they appealed it and it was reduced to £50,000

Since then, through hard work by a variety of charities and clubs, The River has been cleaned up restocked and was recently reported to be the most improved river in England and Wales.

The photo above was taken yesterday, borrowed from The Wandle Trust website. A fire at the same sewage treatment works has knocked out the power, there are no redundant systems in place to isolate the plant from the river and pollution is once again flowing downstream.

I'm trapped at work, monitoring websites for any news, but I really want to get down there and have a look. I'm really hoping it is not going to be as bad as the last incident - time will tell.

Where am I going with this? Perhaps this time, instead of a small fine and a publicity stunt, they should be forced to put a system in place to stop it happening a third time. Perhaps all companies with the potential to destroy an environment should - yeah, as Wayne from Wayne's World said - and monkeys might fly out of my butt.

Latest updates are here.
Posted by Brian at 09:48