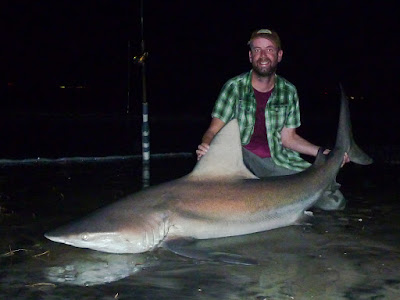 Our best tide of the trip so far was due to peak about 10pm last night, we set off in the dark and were fishing by nine. An hour or so later I heard Paulos shout SHARK!

I grabbed the rod and watched the first run take all 200 yards of mono and about 100 yards of braid backing with nothing I could do about it, while Roger and Paulos pulled the other gear in.

The fight can't be rushed, with 40lb line and a 200lb+ shark one mistake will spoil the trip. Paulos and Roger just watched as I slowly gained and lost line, target one is to get off the backing, target two is to see the shark surface in the spotlight - this took about 40 minutes.

Another 15 minutes later I had her in the surf, Paulos waded out to grab her while Roger kept the spotlight on proceedings (including keeping an eye out for gators). The shark was safely beached, a new PB and a seven footer!

I was absolutely shattered but a 7" ½' sandbar shark was quickly measured, photographed and returned. Mission accomplished, brilliant - thanks Paulos and Roger. 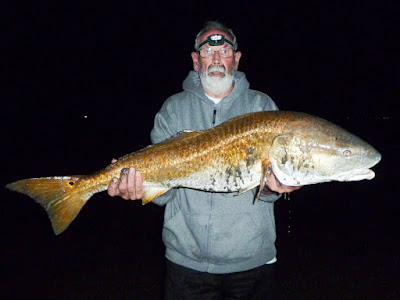 Before the main event I managed a little sandbar shark and Roger landed red drum of 42' (above) and about 40' - great stuff - and we're hoping the bigger sharks have moved back in...
Posted by Brian at 12:36