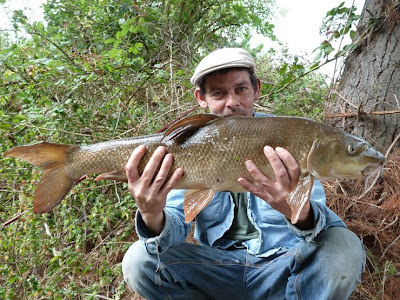 I got back to the river last night, and after fearing the worst, I saw dace topping, a koi and even saw a barbel flash - but it was almost dark so I got up early(ish) this morning for a proper look.

Just downstream of the pollution was a disaster with a big fish kill, the next stretch down suffered less, but I was interested in further down, where I thought less attention would be paid.

I saw dace and roach, three koi (including Kylie) and a barbel - a barbel were I wouldn't expect to see one. After and climbing a tree I found it was a small shoal of barbel - I needed a closer inspection of one of them - I wanted to catch one!! Dan was soon on hand, I fished corn he fished SB4...

Didn't take long before Dan had a wrap round bite and connected to a good fish. To say it was a great fight would be an understatement - probably 10 minutes of hard work, and netting it was no picnic either.

A 9lb 6oz barbel, fantastic result! I think we would have had more but a thunderstorm pushed us off the river soon after - even we aren't stupid enough to fish during lightning! And the rain is great news, diluting the pollution and washing it out of the river.

I didn't manage a barbel but I did add another species to this years list with a 3lb 1oz ornamental koi. 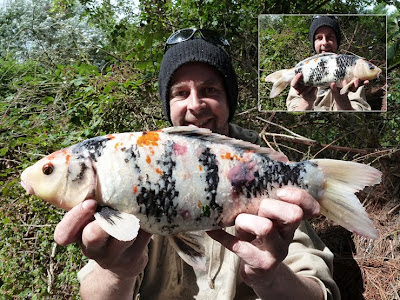