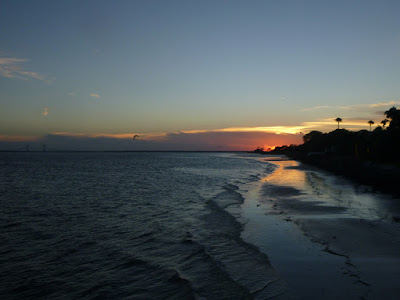 The sun had set, the tide was nearing its peak and the traps were set. Big chunks of stingray fished in a trough about 20-30 yards off shore. And it was a very strong tide tonight, ripping from right to left - hopefully carrying the scent to the unseen predators... 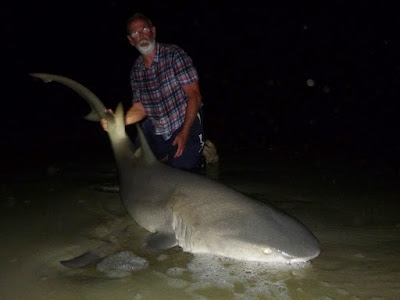 Just before midnight a rod slammed over and Roger was into a fish. In a strong tide a powerful shark becomes almost unstoppable! But over two and a half hours later an exhausted but delighted Roger had a 7’ 8” new PB Lemon Shark on the beach. A seven footer!! 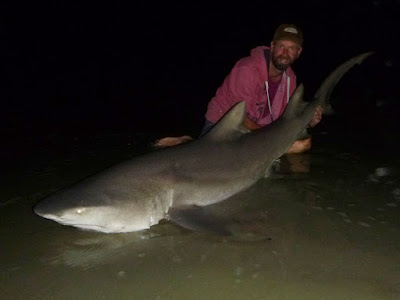 You can’t quit if there are monsters on the feed - and about 3am another bait was hit - my turn for a work out! The 180 yards of mono was gone in seconds and probably 100 yards plus of braid backing. It took over an hour and a half to get all that back. 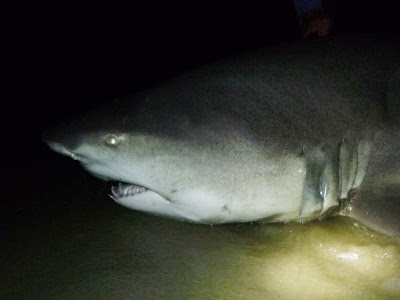 I had my own seven footer, a 7’ 7” new PB lemon shark was quickly measured and returned. Brilliant! What a night, our guide really knows where to find these sharks - without extensive local knowledge you wouldn’t stand a chance - cheers Paulos!