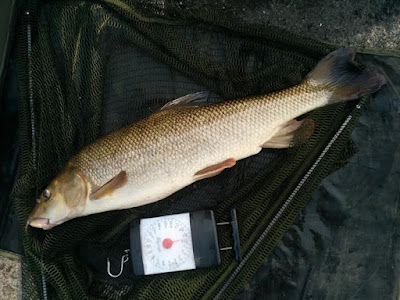 It has been two long weeks since my opening week of fishing and I was gagging to get to the river. I was on the riverbank at 6am and due to the rain last night the water had coloured up, I couldn't go fish spotting as planned - I had to rely on swims I'd spotted them in before.

It was three or four swims before I had a hit on the rolled meat - a barbel, only about 1lb but that didn't matter I just wanted something to put a bend in the rod. Then they really went on the feed...

I stayed about 2 hours longer than I had planned. But they were up for it - including one barbel which nailed the bait as I wound it in and one that swirled at it as it hit the water. A grand total of 15 barbel and 4 chub. No monsters, the best going 6lb 7oz (above), but the action was hectic.

It didn't all go to plan - I lost 6 barbel to hook-pulls, two of them looked like bigger fish - can't really complain though.