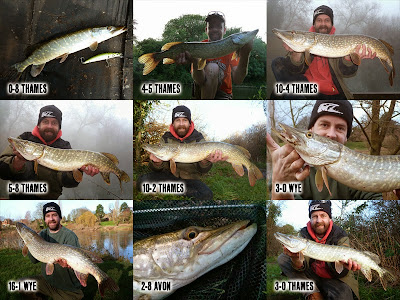 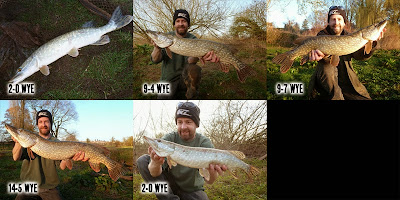 The Challenge: 200lb of pike, including 5 doubles, over the 2013/2014 river season. And I thought it was going to be a fairly easy one this year after the barbel challenges of the previous two seasons... Little did I know what work and the weather had install...

I managed 14 pike for 92lb 11oz and a total of 4 doubles to 16lb 1oz - Failed! I wasn't worried by a slow start, I knew the Wye over December and January would save me - but the floods had other ideas.

James had his own challenge after 200lb and 5 doubles, but after a healthy start his campaign was also ultimately finished off with the floods. Interestingly Paulos would have come the closest with only 5 trips to the Wye - he landed on some cracking days!


Next season I'm going to try again, as is James - and this time we're going to pool our resources; James showing me some local haunts, and me putting him on some Penton and Wye pike... Hopefully we'll have better luck next time...
Posted by Brian at 06:37