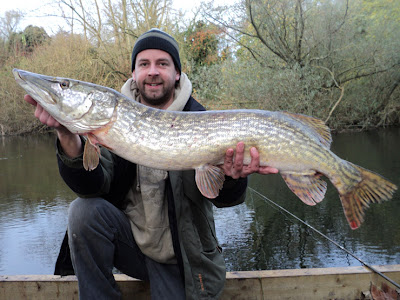 Another much anticipated trip to Penton Hook yesterday and similar tactics to last time, ledgered sprat or sardine... They seemed to prefer sea fish.

Our chosen swim was occupied so we found a similar spot, fast water with overhanging trees and it wasn't long before I had a run. A dropped run, the sprat came back covered in tooth-marks, would have made a good photo but excitement meant it was cast straight back out...

About an hour later another positive run on a sprat, a great fight and an old friend, the seventeen pounder I caught two weeks ago (although I didn't know it until I compared the photos). A cracking start, especially as we'd all put a fiver in for a sweep on the biggest fish! 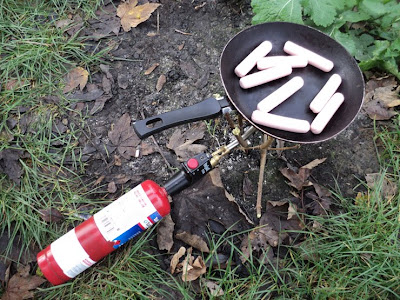 With a fish banked Dan started on the sausage sandwiches, the cooker thing had run out of gas so he used a blow torch... Which was pretty cool! 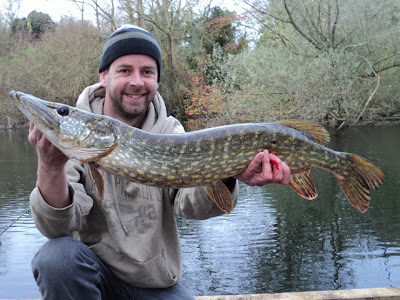 Dan was keen to unhook the first pike he caught, so I showed him how to open their mouths and extract the hook without harming the pike or getting bitten... And with that the pike got me! Not a good demonstration! 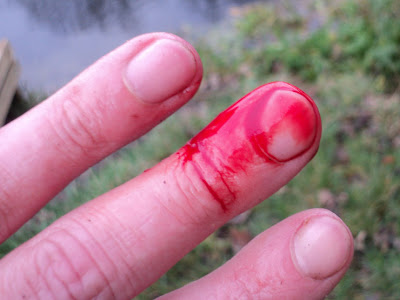 Darren and I decided to sit it out and wait for a run but Dan decided to go in search of his first pike and it wasn't long before I heard a shout. His first run and his first pike was on, I got there with the net to see an ecstatic Dan and a pike waiting to be netted. 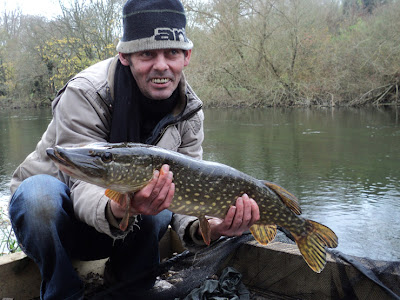 6lb 11oz, mission accomplished! I opened her mouth and Dan did the unhooking duties. Although he wasn't keen on holding her jaw for the photo. 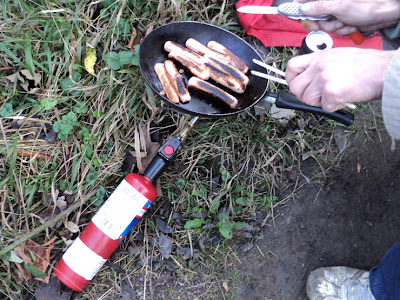 Right then, time for lunch... That'll be sausage sandwiches....

I interrupted cooking with another run on sardine, another great fight (I love river pike) and a 10lb 7oz pike. Darren filmed most of the proceedings, I'll put the video on here when he sends it to me. A second double! 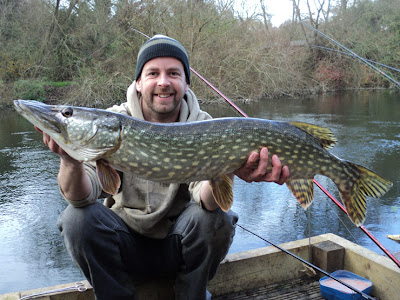 Darren had a feeder rod and a pike rod out. A bite on his feeder rod and a good fish on, when it was about half way cross the river I spotted it - a pike, looked like a double. But it bit through his line... Bad luck, if only it had been on his pike rod.

Another run on my ledgered sardine and a 10lb 15oz pike, my third double of the day! Continuing my lucky streak, every dog has his day! 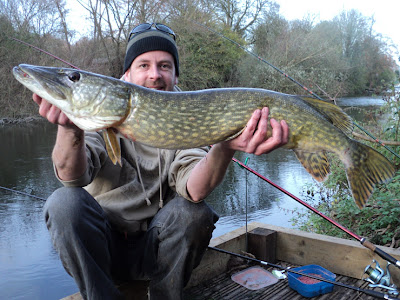 We fished on into the dark but no more runs, and the sweep was mine. But Dan didn't care, he's in the pike club now... We'll all be back...