Pike At The Palace 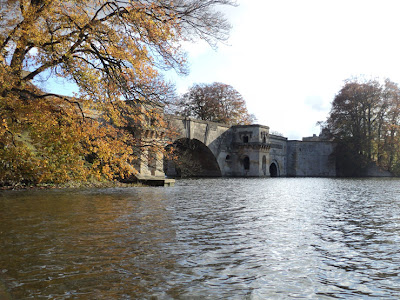 A trip to Blenheim Palace today with Sean from Fishmail, the early morning water looked great, the sky was overcast and there was a light breeze, perfect for pike fishing. And we were the only boat on the water!

We started off trolling, and 40 minutes later Sean had a run on a small roach deadbait and a 9lb 0oz pike, below. A cracking start. I had a couple of bumps on a plug before Sean had another run, he was caught in a snag - or so we thought before a bigger fish powered away - but pulled the hook. Seconds later he had a third run, but the fish dropped the bait. They seemed to be feeding. 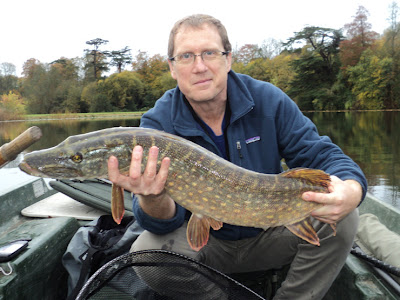 Then the sun came out and all went quite, we trolled right around the lake before settling into a spot to wait for the fish to come back on the feed, we'd only been there a few minutes before I had a run - but the pike dropped the bait. 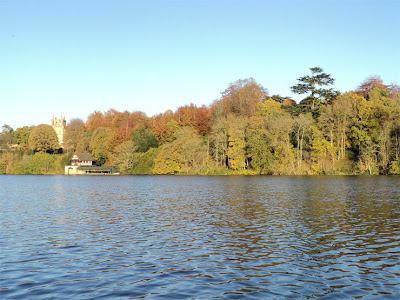 As the light was fading and we were running out of time, Sean had another run on roach deadbait. He hit the fish and it powered off, it put up a great fight while I wound in the other rods, moved the ores and set up the net (it's a busy job when you're not the one connected to the fish).

The pike fought well above it's weight before Sean got it over the net. She went 12lb 6oz, and they say still water pike don't fight! What a fantastic fish. 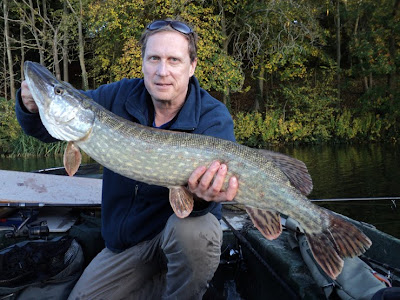 We had a few more trolls over the area until darkness descended and it was time to head back to the boathouse. Well done Sean, revenge for our trip to Chew! Thank you I had a fantastic day, even if I was just net-man.