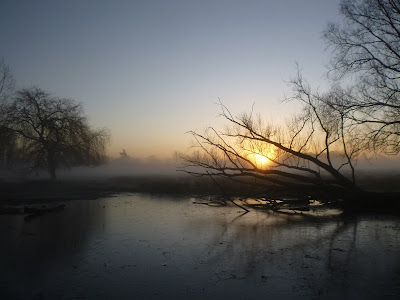 My eleventh season review - written monthly as I went along. A lot of fishing and some cracking fish landed; my first wels catfish, carp on the fly, loads of barbel and even the odd pike. And my fish of the season has to be the monster six pound chub from the local little river. A long blog post for me - but it took all year to write...

June: Well rested I was looking forward to the start of the river season, and this year it was all about barbel. Seventeen barbel on the opening morning was a result beyond my dreams! And four more short sessions took my barbel tally to 34 fish for the month - a cracking start to my 100 barbel challenge, can I complete it in the summer?

August: I continued my barbel quest with short early morning sessions - which included bagging a double - my barbel count was up to 84 fish. But the fish of the month (perhaps season) was a six pound chub from the local little river. Me and James have long speculated their existence - and here was one on the bank - brilliant!

October: Pike time! The season opener was a double, followed a few days later with a lure caught PB of 18lb 3oz - not a bad start! I tracked down some pound plus perch from the local river, and the barbel were on the feed - 22 added including two doubles to 12lb 1oz. Oh, and had a couple of weeks holiday in Île de Ré as well.

November: Autumn really stamped it’s foot - a wet, cold month with most of the rivers in flood. And I was really struggling with the stillwater pike - only one lost fish all month! The barbel and chub on the local river acclimatised to the frosts and I added 11 more barbel to the challenge, including two more doubles - season total 135.

December: It kept raining - the rivers were out of sorts all month - even the local little river. Not much fishing. I started December with a double figure river carp on light trotting gear and added 4 more barbel in two short trips. A couple of sessions on a flooded River Wye produced only one pike - but a double - and I love Wye pike!

January: More floods and frosts, but when I had the chance I targeted the local barbel adding 11 more to my challenge (total now 150). Seven jacks were added to my pike tally and a cracking 5lb 9oz chub was landed. But the highlight of the month was a brace of two pound grayling stalked out of a beautiful little chalk stream - a brilliant day.

February: Started with a fantastic week pike fishing on The Wye with my brother - 13 pike including 6 doubles, topped by an 18lb+ pike each. Perfect timing as the river flooded to record height as soon as we left. Locally I added 4 more barbel to my challenge and had a massive bag of 70 chub on the stick ‘n’ pin. Two weeks left...

March: Lots of rain - but I did sneak out between storms. The month starting with a monster 6lb 5oz chub and I added 10 more barbel to my challenge - taking my season total to 164! A couple of jack pike and a bit of wandering about with the stick ‘n’ pin rounded out an absolutely brilliant season - roll on the next one...
Posted by Brian at 06:48