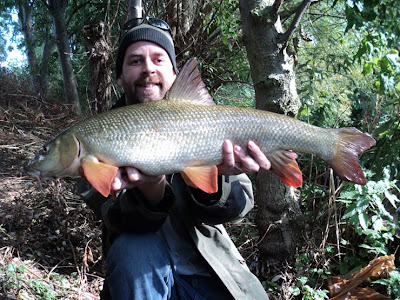 While London's youth decided to go aggressive-window-shopping me and Dan decided to go fishing. We headed to the Wandte about 2.30pm and fished in the bright sunshine. I had a bite first cast and connected to a barbel about four pounds but after a brief fight the hook pulled - at least we knew they were feeding!

We then worked our way downstream, it was slow going as I have a twisted ankle. And no bites despited some very fishy-looking swims. Just after 5pm I cast out into a nice looking swim and had a bite instantly, a great fight and a cracking 7lb 0oz barbel (above) to luncheon meat. It was nice to get a photo in daylight - I think the smile says it all!

With the water thrashed to a foam due to the battle I moved downstream and continued fishing, I had to be at a birthday party at 6.30pm so just before seven I crept back to the swim (I was going to be late) and had another bite, an even better fight and a 7lb 4oz barbel (below) I thought it was the same fish again as Dan slipped it into the net but it was slightly heavier, and comparing the photos it's a different seven pounder - two sevens in a day - sweet!

And with that I hobbled off to get the train. And Dan's trip, same bait, same swims, no bites, I'm sure he's saving up his luck for the double! 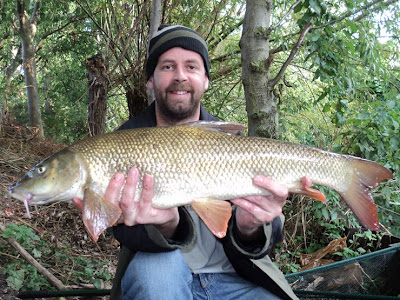