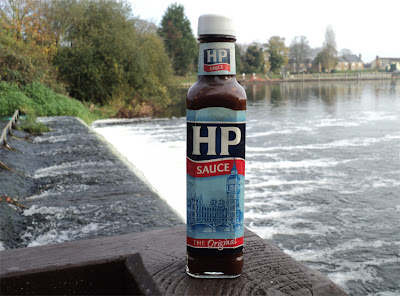 And we remembered the brown sauce!

Another trip to Penton Hook yesterday and as Darren is away on holiday Dan and myself decided on a much more leisurely start time of 10am... Still meant getting up at eight, but we could do most of the journey on trains, bike riding was minimal!

A simple set up of 3oz ledger, bead, swivel, wire trace and single barbless treble hook. And a choice of small roach or sprat deadbait. The plan was to spend about half an hour in each swim until we found a pike.

The first spot looked devoid of life so we moved and fished against far side features. It wasn't long before I had a run on dead roach and a 4lb 0oz pike. 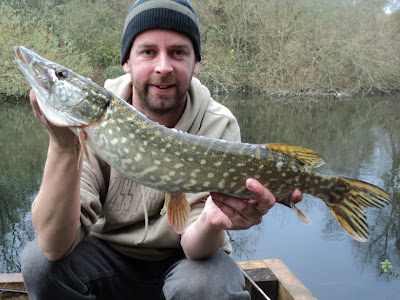 4lb pike on ledgered roach, a pike before breakfast, great! 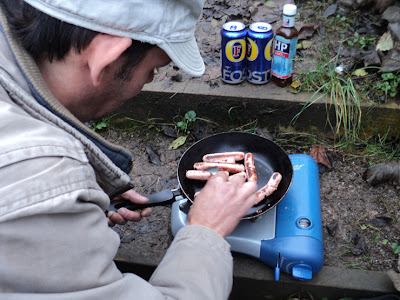 The cook. Beers were for later, not for breakfast.

Another run and a pike on, this one went right up the river in big strong runs. The water is perfectly clear so you can see the pike almost instantly, I got the pike right to the net before she shook her head and spat the hook. Looked about 8lb, would have been a Thames PB.

Next cast and I had an instant run. I winched the fish half way across the river before she knew she was hooked, I thought there wasn't going to be any fight at all, but it looked like a twenty so I was eager to get her in the net. Then she woke up and put up a cracking fight, this fish ran downstream and made 2 hundred foot runs and found a snag twice.

After some heart stopping moments I got her over the net. The net wasn't really big enough but somehow Dan got her in there - gold star for Dan. He then picked the net straight up breaking the net pole - remove Dan's gold star!

The pike had a massive head and a long skinny body and went 17lb 12oz, but judging from the length she'll be a 20 by March, I hope to see her again then. My first Thames double - fantastic! 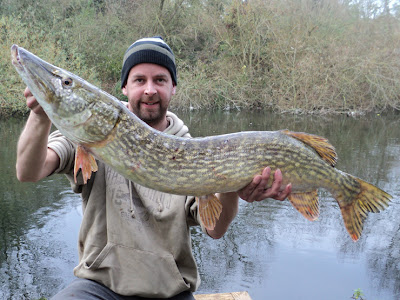 A new sprat was cast across, and much to Dan's disbelief another instant run. Not much of a fight except for briefly hitting a snag, or so I thought, when I got her in there were tooth marks where she'd been grabbed by a larger pike. The pike went 8lb 8oz, I'd like to meet the one that grabbed it! 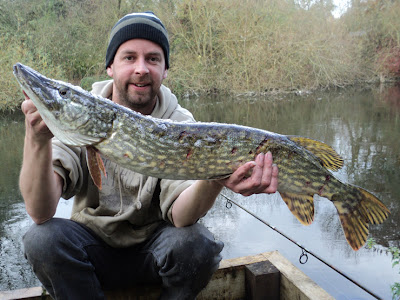 Dan was fishing exactly the same set-up as me, bait was from the same batch of sprats and the baits were fairly close together but all the runs were on my rod. Fishing is weird like that sometimes.

I did bring a second rod to catch some livebaits should the deadbaits be ignored, but we both decided to stick to the deadbaits. So I put on a ledger and we took it in turns to fish against features.

I was first into the action, hooking and loosing what must have been a barbel (although we didn't see it). Dan was next up and we're pretty sure he hooked a carp, again we didn't see it. Everything seemed to be feeding today. Dan wrapped up the ledgering with a gudgeon - but neither of us fancied it for livebait - lucky day.

My pike rod was away again and a tail walking, acrobatic 7lb 0oz pike was landed. A really beautiful green and gold fish on a sprat. 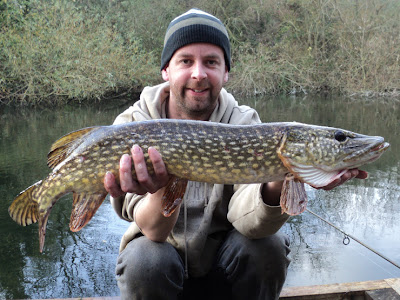 Another sprat was cast back to the same spot and a pike picked it up on-the-drop. I winched it half way towards me before it woke up and shot down the river, eventually finding a snag. It was stuck, I put the bait runner on waited for it to swim out, when it did I wound down and the fish went straight back into the snag - and they say they're stupid! I eventually got it to the net and it went 11lb exactly, two doubles! 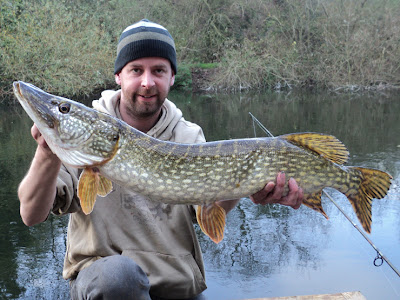 Me and Dan swapped where we were fishing, I was willing him to catch a pike, I know he'll be hooked once he gets one. And we couldn't work out why all the runs were on my rod. Time for a pork pie, a beer and a bit of a think... 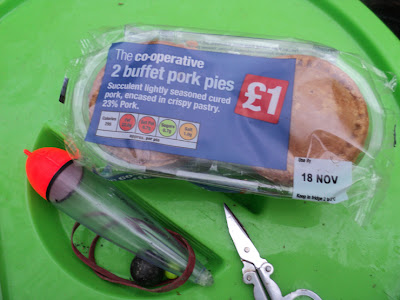 Another run, yeah on my rod, this time on ledgered roach (we were running low on sprats). And my sixth pike of the session went 7lb 11oz. Sorry Dan. 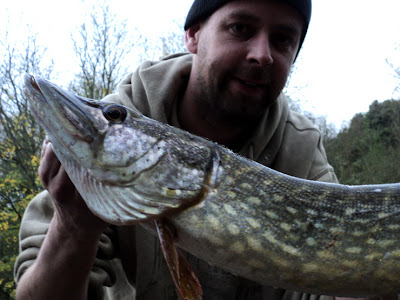 We had intended to fish until 3 o'clock, but couldn't tear ourselves away and we fished into darkness... Unfortunately no pike for Dan, but there's always next time... Can't wait... 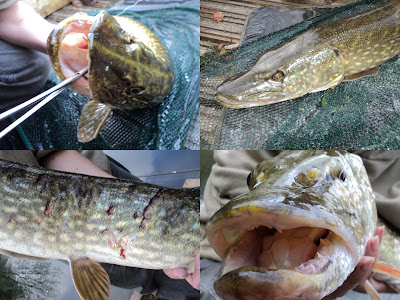 Additional photos by Dan (click to enlarge).
Posted by Brian at 07:59