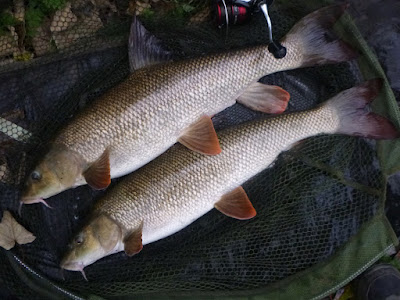 I saw a big tail sticking out of a weedbed, trundled a cube of spam down to it - and fish on! A good double hammered around before finding a snag - I pulled this way and that, but it was stuck. Giving it some slack eventually it swam out - game on! Great fight - until - as it was in front of the net the hook pinged out!!

Only an angler knows that feeling - you can only look on as your prize sinks back into the depths - gutted! A mild day after the recent cold snap - and I thought the barbel might be on the munch. They were - seven barbel and 2 chub found the net - including two barbel in 2 casts (one was resting in the net). Not a bad consolation prize!
Posted by Brian at 06:03