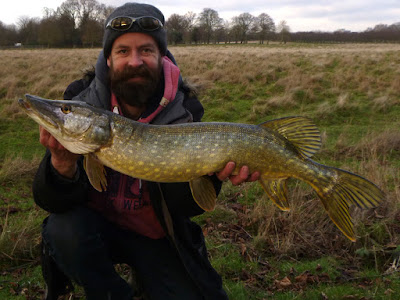 Since posting about the balance between success and failure I’ve been on a bit of a failure streak! First up I lost a pike about 12lb. A few days later I lost a high double almost at the net - and I’m pretty sure it was the fish James caught a few days later at 18lb plus..!

So with 2 hours on the clock I hit the ponds, and it was cold - water must have been just above freezing. It took over and hour before something slammed my lure, shook its head and came off - hooks were sharp and an aggressive take - what is going on?

Running out of light I had to get a pike in the net. Eventually another ferocious take and my unseen pike ploughed straight though a snag. Eventually swimming out the way she went in, a really hard fight for it’s size and an 8lb 8oz pike was safely in the net - thank f**k!
Posted by Brian at 06:41