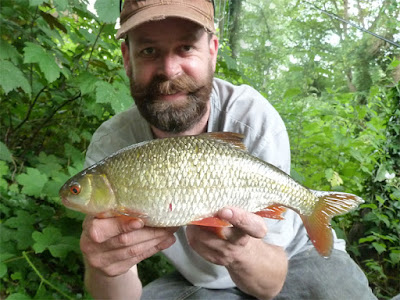 Roach or bream? As most of my target species are at their lowest weight at the moment I thought I'd have a dress rehearsal on the roach, my target weight is 2lb but I'm going to have to travel for a chance of one of those - I decided to stay local with the aim of a pound plus fish.

Sneaking into my chosen swim I found a film crew and a Matt Hayes wannabe standing there - for every fish in the area to see - crap! I opted to have a blast at the barbel instead, wandering about I was soon into some fish landing 4 barbel to about 5lb and half a dozen chub to about 3lb - result!

I went back and spoke to the camera man - apparently there weren't any fish there and they were off. I gave it an hour or so to settle before chucking in some maggots and ledgering bread over the top. It didn't take long, second cast and the tip bounced over - a beautiful 1lb 4½oz roach was in the net (top photo). Mission accomplished.

I popped it back and I think I spooked the shoal, the bites became harder to hit - I had two more about 8oz before they had completely wised up to me. Note to self: bring a keepnet next time!

A quick roll on my way home produced a barbel about 6lb and week one was in the bag. 265 days left... 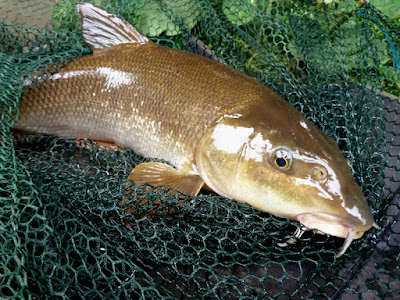