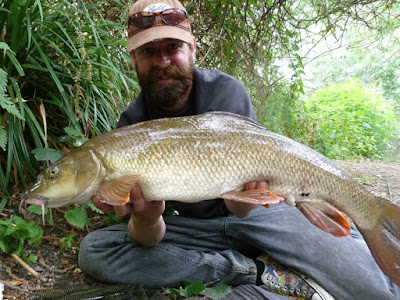 For whatever reason the odds seem to be against fishing with Dan, but he phoned last night, I met him at the pub (where else?) and we made plans for today. He was going to head to my house first thing to re-spool his reels and we'd hit the local river at 8am, I was sure I could put him on some barbel.

I was up at six, chopped up the bait and got the line ready (quite a selection, almost everything between 28lb & 2lb).

By midday I'd tidied up, washed up, done the hoovering and all of my washing, I'd sawn all the house plants in half and mastered the lightsaber, all well listening to loud Kerrang TV. Not really - I didn't hoover.

At 1pm I went on my own. On the riverbank by two I could still fit two hours in, and a barbel first cast about 1¾lb - great start. Followed about 20 minutes later with a chub about 3lb. Then after a bit of wandering I spotted a better fish - what turned out to be my first tail-walking barbel, 7lb 14oz - looked a lot bigger. And I had a photo to send to Dan! 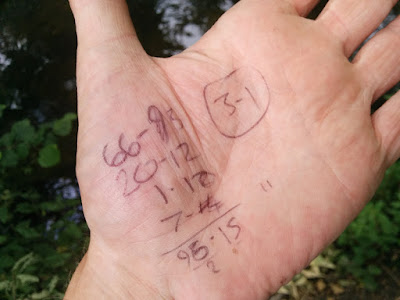 I though about our first challenge on the river, 100lb of barbel between us over the course of the season. I worked it out, I needed 3lb 1oz to crack that in the opening week - three trips.

Right, I was going to stay until I'd cracked it - even if I had to fish into the dark and incur the wrath of my girlfriend... 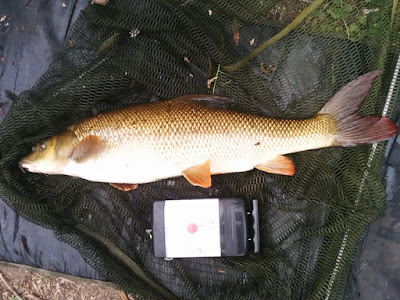