Escape To The Farm IV 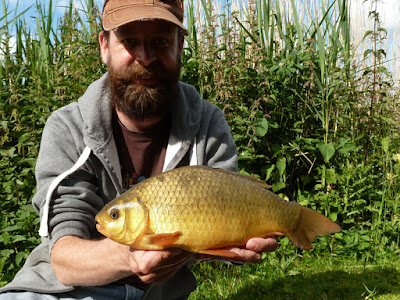 Well the season opens tomorrow, in less than an hour in fact, but there was still one fish on my closed season list I really wanted to catch. I'd planned to be at the fishery when the gates opened but I had to work this morning, so after amending a website I shot down on the train, I spent far too much time in the on-site shop (and money) and was on the water by 3pm. 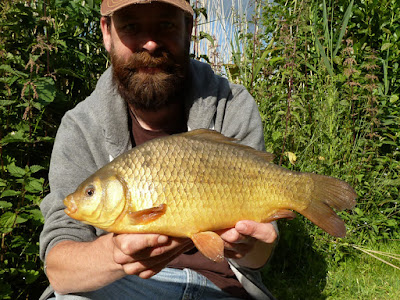 After a ton of bream I finally hit my target just after 6pm, a 1lb 6½oz crucian was in the net (top photo). This was quickly followed by a 1lb 13½oz crucian (above), the best of the day. They had moved in.

I managed a total of 7 crucians, adding a 1lb 3oz (below), 1lb 2oz, 1lb 4oz, 1lb 8oz and 1lb 9oz before the tench moved in. No monsters but it's great to catch them whatever the size. They all fell to either corn or a piece of prawn. I followed them up with 7 tench to about 4lb, all on prawns. A great afternoon sat in the sunshine - mission accomplished. 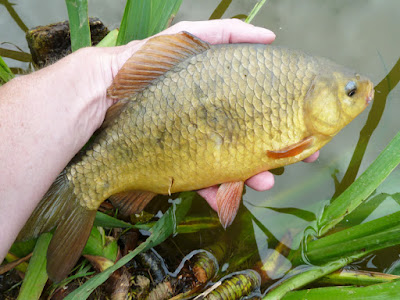 Right, hardcore nutters who are sat on the riverbank waiting for midnight - good luck. I'll be down the local river after breakfast...
Posted by Brian at 23:01