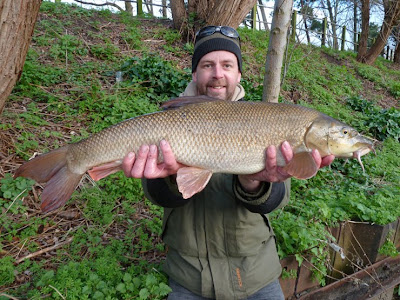 It was with a sense of insanity that I wrapped up warm and headed out into the pouring rain hoping to catch a barbel - the insanity that comes from only having a week left before the season ends - it doesn't feel like it's been nine months (and 65 barbel hunting excursions).

The river was dirty and rising, good news after the conditions on Saturday. The bad news was; there was so much crap floating down I couldn't keep a bait in the water for more than a minute. I tried a few swims on route down the river, stopping off to shelter under an umbrella a couple of times when the rain became too heavy.

I got to my chosen spot and about 3pm the rain stopped, an hour or so later the water began to recede and less rubbish was washing through. Now I could hold a bait out for longer and it wasn't long before I had a few knocks on my luncheon meat - I hit one and it felt like a small chub in the dirty water - until I got it right under my feet, then it shot upstream in big powerful runs.

A few more casts despite being over my time limit resulted in a little eel. I wish I could have fished on, I was sure there was another barbel in the swim, but he'll have to wait for next time. And many thanks to Stuart for net and photograph duties.

Barbel Challenge
Back before the season began Dan and myself set, what we thought would be a nearly impossible target of catching 100lb of barbel between us. By the end of August we'd cracked it, by the end of September we'd cracked 150lb and I really thought we had a chance of doubling our target, something beyond our wildest dreams when we began.

But a barbel-free winter and both being busy at work now (Dan hasn't been out on the last two trips) means it's really down to the wire... 21lb 10oz still to go and two or maybe three trips left...