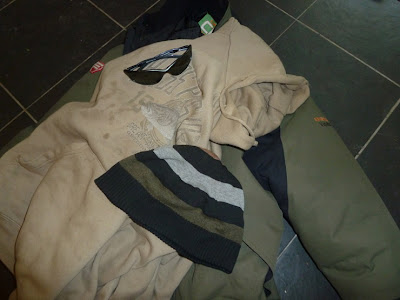 Well that season seemed to go by in a flash, it seems like no time at all ago myself and Dan were on the riverbank counting down the the last few minutes of the closed season, hooks baited, ready to start our quest for 100lb of barbel.

And reading back through the blog what a season it's been, probably my best ever! There was the Wandte challenge, Penton Hook, drama on the Wye and a new venue, Blenheim Palace. 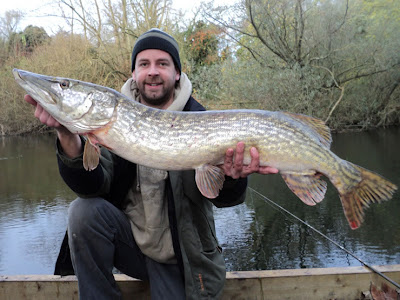 I was determined to catch a Thames pike this season, and when Darren mentioned weir permits my thoughts turned to Penton Hook. From what I've heard Penton Hook is long past it's best as far as pike fishing is concerned, it used to be known as the home of the five minute live bait (because that's how long they'd last), but we knew a few pike were still coming out.

Over the course of the autumn and winter I spent 10 sessions there for a total of 21 pike for 158lb 13oz, including 5 doubles to 17lb 12oz. I also managed 5 perch over a pound - so some great fishing. Dan caught his first pike at 6lb 11oz and has since bought some new pike gear, a piker is born. Darren caught his new PB pike and a new PB perch at 2lb 1oz, and I'm pretty sure Stuart will be accompanying us next season in search of his first pike.

It's a bit of a pain to get to, but it's a beautiful island and with the now traditional sausage sandwiches and great company it makes it a fantastic day out. I hope to do a few sessions there next summer after the barbel, bream and carp... And my new target is a Thames twenty pound pike! 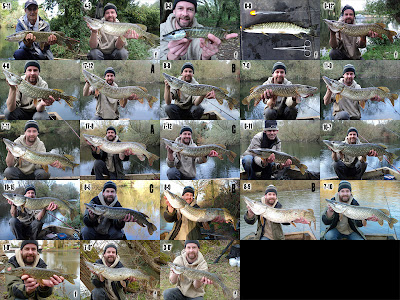 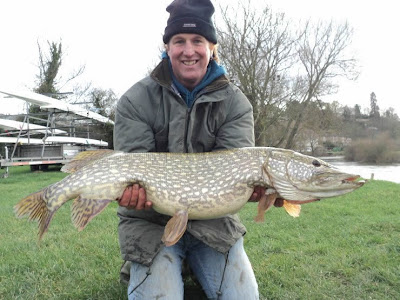 It was tough going on the River Wye this season, I only managed 3 pike, 13lb 4oz, 10lb 6oz & 5lb 8oz. Roger had two pike to 16lb 8oz and Paulos managed two pike with the best going 17lb. We didn't have the best conditions and piking there all season hasn't been great. Still I love fishing on the Wye, you never know what's lurking beneath the muddy brown water.

Steve bucked the trend and had a fantastic day's sport, six fish, including 5 doubles for a combined weight of 92lb 10oz. And after years of trying he bagged his first twenty, 20lb 14oz - top fishing that man!

I ventured back in February but conditions were against me once again, with salt and snow in the water, Roger and I knew it would be tough fishing but you have to give it a try. One run in three sessions, for a fish lost at the net, a very big fish - The Monster! After initially being gutted I've become inspired by the sight of this fish, I'll get her next season... 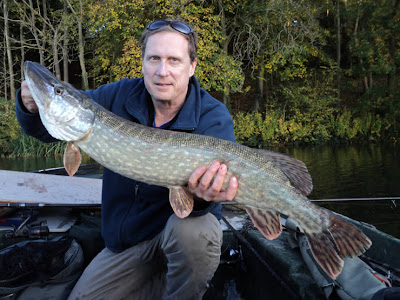 With no Chew Valley tickets landing on the doormat I was delighted to be invited to Blenheim Palace by Sean. A stunning place to fish. We had two trips there and on the first session we were the only boat on the lake! I was just net-man with Sean bagging two pike, 9lb and 12lb 6oz.

The next trip we fished after a frosty night which wasn't ideal but I caught my first Palace pike of about 7lb. It was great fun to be out in a boat surrounded by the beautiful scenery... Hopefully we'll do it again when the pike are more switched on. 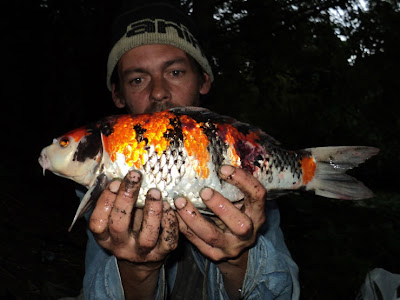 The riverbank that has been my home for the last nine months, or at least it feels like it, when I wasn't at work I was there... Hundreds of hours sat next to this fascinating, infuriating, tough little river.

Well first up is the barbel challenge, we managed to catch 62 barbel for a combined weight of 208lb 3oz and 29 fish over our target weight of 3lb. And Dan got a double. I think I'll do a separate blog post charting our progress throughout the season.

We met a lot of interesting people, made some new fishing-friends and caught a lot of fish. We caught a total of 10 species of fish including koi carp, a brown goldfish and a stone loach, as well as the ones you'd expect. Dan managed a new PB barbel, a new PB chub of 4lb 6oz and his first koi at 2lb 6oz. I got a new Wandte PB barbel of 9lb 12oz and a new PB koi at 6lb 9oz (Kevin!).

We had a lot of chub and eels, they often helped avoid a blank while we were after barbel, but I couldn't land a pound plus roach (despite hooking two). The best roach went about 10oz, I'll be after a pounder next season!

I think there will be some exploring over the closed season, trying to locate more barbel, roach spotting and I'd like to go after a trout next season... Can't wait! 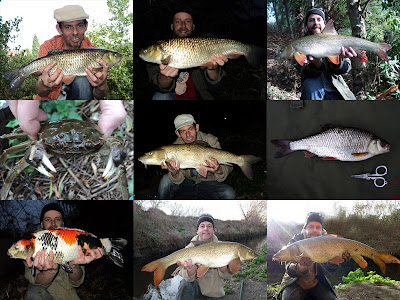 As I sit here now, staring at three months without fishing, it looks like it's going to be a very long closed season, perhaps we'll head out after some sea fishing over spring. To everyone that is still fishing, tight lines and for river anglers like me... Only 89 days to go...

And I've added the rest of this season's photos to the photo album.
Posted by Brian at 10:34