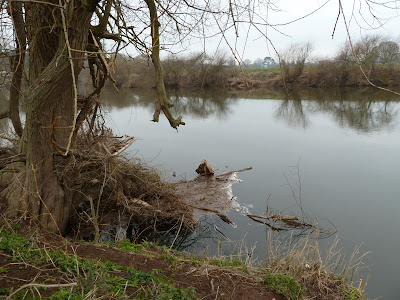 A couple of hours piking on the Wye this afternoon, and it wasn't looking good. Both myself and Roger had been ledgering sprats for a couple of hours with no interest. I decided to try a float-fished sprat over a snag about a foot from the bank.
After about half an hour the float bobbed, then remained still for a few seconds before hammering down. I struck and realised I was connected to a good fish - unfortunately the pike had gone through a snag beneath my feet. The most frustrating fight then look place as the pike headed out to open water while all I could do was wind her back to the snag... Hard going and no fun at all.
Eventually I had her beat, and she lay in the water still connected to the snag. I knew she was a personal best, but was she THE fish I've been chasing for 20 years?
I pulled her and the snag over the net, and as she was about three-quarters of the way in the f**king line broke!
I seriously think it's going to give me nightmares!
Posted by Brian at 17:53