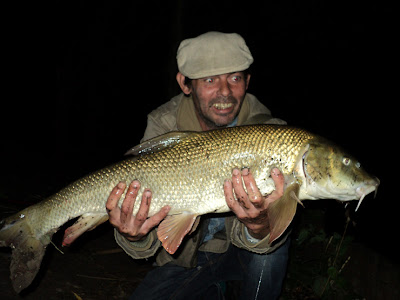 I'll write this tomorrow, but the best way to guess the weight is to look at Dan's face!

...Evening session on the river, I continued my search for a roach and Dan continued his search for a barbel (as always). Things weren't going well, we'd had 3 mitten crabs, 2 boot-lace eels and a tiny dace between us before sitting watching motionless rod tips for an hour or so... One last swim before home. Dan had his bag on his back and was just about to reel in when there was a little knock on the rod tip. Another little tap and he hit it.

The rod bent right round and there was a big swirl in the shallow water in front of him. Dan calmly let the fish run around the river while I hastily reassembled the net and found a torch. We got our first glimpse of the fish as it slid over the net. What a fish!

It had been the bite we were waiting for... A double! The scales rested on 10lb 2oz... Top work Dan! A few photos and making sure the fish swam away strongly, then a hasty packing up of kit before we were sat in the pub examining the photo in disbelief... Got one!

The almost impossible barbel challenge we'd set ourselves was in the bag. And Dan had smashed his PB, I knew he was saving up his luck for something special.

Further examination of the photo on the computer revealed it was the same fish I'd caught earlier in the season at 9lb 12oz, it had put on those important extra 6oz.