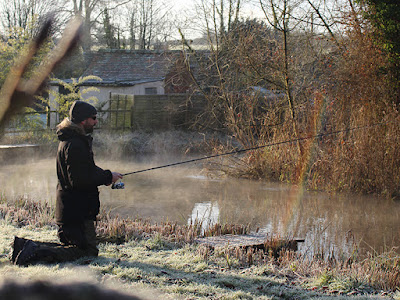 What a season! Things that spring instantly to mind are canal pike, perch fishing in a gin-clear Wye, chasing jacks in a little chalk stream (it's not all about big fish), several pound plus roach, a big zed (twice) and monster arapaima. And the Predator & Barbel Challenges.

As well as fishing there was some beautiful locations and being the net-man and photographer for several other angler's cracking fish. And exploring some new venues with James (who took the fishing at the end of the rainbow photo above - shot in a million - thanks).

Here's a breakdown of a brilliant season that included a ton of fish and 6 new personal bests - bream, dace, rainbow, rudd, tench, and zander.

I achieved a target I've been after for a few years; a pound plus roach from the local river - a 1lb 2½oz beauty - my fish of the month and perhaps a target for the winter.

August: A trip to The Wye provided a start to the Predator Challenge in the shape of perch, including two over 2lb - I really wanted to beat my PB this season and would love a three pounder.

I also added trout to this season's species list, normally caught while fishing for something else I had a great afternoon targeting them. And took my barbel tally to 70 fish - the mission was now to catch 100 this season.

A low water recce to The Royalty will hopefully come in handy for future pike sessions and we made a start on the local zander fishing. And an afternoon on the local river took my total to over 80 barbel, was the 100 target is in sight?

October: A trip to Thailand was the highlight of my month, three full days chasing monster fish in paradise. Four arapaima to 180lb topped off a trip that also included a bunch of catfish as well as other exotic species - I will be back!

Back to the Predator Challenge, landing 3 pike but unfortunately lost a nice mid-double on The Royalty. A new PB rainbow rainbow trout on The Test the next day was some consolation. Predator Challenge: 68lb 8oz

November: Started with a trip to a beautiful Chalk Stream chasing jacks in the clear water, topped off with two 1lb+ roach. Then a trip to Bury Hill provided the start of an obsession with zander and zander rigs. Starting to get a handle on it, I landed 17 zander and a new PB of 9lb 1oz!

A trip to Coventry for Jeff's 'Zebvember' was tough cold fishing but I did land a new venue double figure pike of exactly 10lb - and she was beautiful! Predator Challenge: 169lb 14oz

December: Still mild, I continued my obsession with zeds, experimenting and refining rigs - it took over my whole month, but I did land my PB zed again at the same weight, my second biggest at 7lb 14½oz and took my career total to 52 fish (41 of them this year).

A couple of quick trips to the local river upped my barbel count to 93 fish - 7 left for the century! Predator Challenge: 281lb 10oz

January: A game launch took a lot of my time, and a non-fishing trip to Iceland, but even the few times I did hit the riverbank it was tough fishing. The year opener was a blank and a couple of trips chasing dace produced only trout.

An afternoon on the local river was the main event of the month, landing a 4lb 6oz chub and adding three more barbel to the challenge, followed by a 3lb 3oz chub in a very quick trip the next day. Predator Challenge: 281lb 10oz - Stalled!

February: I did loose a big barbel and a PB roach, but I'm not going to dwell on that. It was a month full of fishing and fish! Exploring a new river, my best brace of roach, new PB dace and I wrapped up both challenges.

Barbel number 100 graced my net for an average of 5 barbel per trip - not bad for short sessions! And bunch of chalk stream jack pike pushed my Predator Challege past the 300lb target. Predator Challenge: 304lb 14oz - Cracked it!

March: The final two weeks. The first of which I watched slip away from the comfort of my office. But the second saw me into the barbel, completing the second part of the Barbel Challenge, 500lb. And had a couple of very enjoyable relaxed trips messing about on rivers before they closed. Predator Challenge: 309lb 6oz

But now we're back in the closed season, our enforced break. I do plan on hitting the ponds when the weather improves but for now I have an office that looks like an explosion in a fishing tackle factory and a very long to-do list... Fantastic season, roll on the next one!
Posted by Brian at 10:32