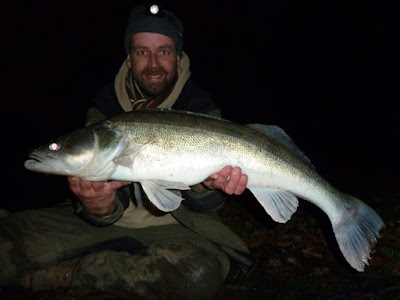 The 300lb Predator Challenge: I have limited time and have to travel to find pike (and the floods are often a pain) so I added other predators to the mix this season. Having failed the previous two challenges I thought some evenings on Bury Hill chasing zeds would push me towards the target and I also hoped to find a pond close by stuffed with fat little perch.

The Barbel Challenge didn't interfere with this one as I only targeted barbel when I didn't have enough time to travel further afield in search of predators.

It didn't go exactly as planned, most of the perch came from The Wye in summer, and I got completely obsessed with zander towards the end of the year - they provided a big chunk of the target weight and a cracking new personal best of 9lb 1oz.

It did keep me searching for pike, no monsters but 3 doubles (2 from new venues) was great. It was a shame The Wye was out of condition for most of the pike season - I had hoped to spend some long weekends fishing it this winter.

But I did achieve 300lb, I kept at it (which was the point of the challenge) and a bunch of chalk stream jacks dragging me over the target - it would have been nice to get into the bigger fish - but I love catching pike no matter what size they are.


Research: Over the closed season I'm going to find some new pike venues for next season, I need to find lakes and canals to beat the winter floods, and I'm sure some new rivers are waiting to be discovered...
Posted by Brian at 09:14