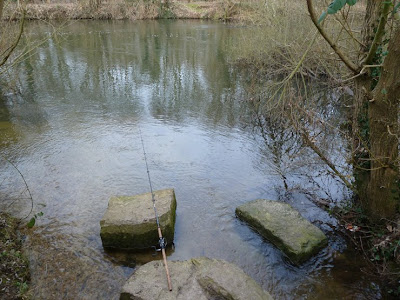 Back to Penton Hook in search of pike and it was an expensive start to the day. On route I crashed my bike into a gate smashing my landing net pole into three pieces and worse still, breaking one of my pike rods - one of the most expensive rods I've ever bought...

I should mention at this point I have a book for sale, it's called Jack's Pike, it's very funny and only a fiver... Probably need to sell a couple of hundred copies to replace the gear broken in the crash :) 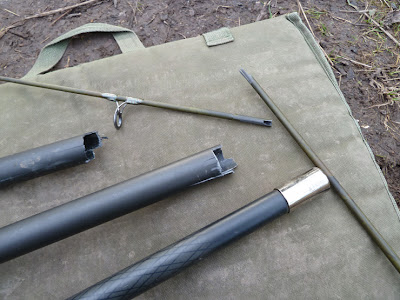 To the fishing. The water looked great - but it always does here. Darren and I presented sea baits in the usual 'banker' swims both float-fished and on the lead. But no runs materialized. And a regular dog-walker I spoke to informed me that he hadn't seen anyone fishing for a couple of weeks - not a good sigh.

By lunch time we'd covered half the island and hadn't seen a sign of a pike. Time for lunch, the traditional Penton Hook sausage sandwiches - except Dan who had the blow-torch and the supplies hadn't turned up. Darren couldn't help as he had brought raw bacon and brown sauce... Dan if you're reading this feel guilty! 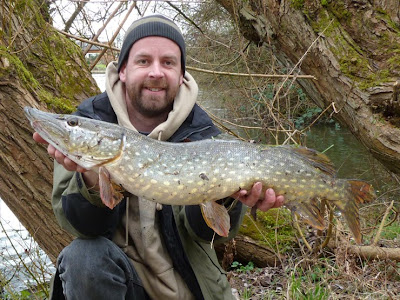 I cast a float-fished sprat to a feeder stream and it wasn't long before the float bobbed and drifted away. No fight at all in the water, but when I got it on the unhooking mat it was a different story. A hunchback 7lber.

A new sprat was cast to the same spot but I wasn't happy with how the float was holding, I wound it in and there was a swirl behind my bait, it made me jump out of my skin but I saw a larger pike sinking back to the depths - possibly a double.

The next cast was soon met with a bob on the float, I struck and was met with a small scrappy pike about 3lb. I thought I'd found a shoal of fish, but an hour or so later realised it just seemed to be the three, and the bigger one didn't make another appearance. 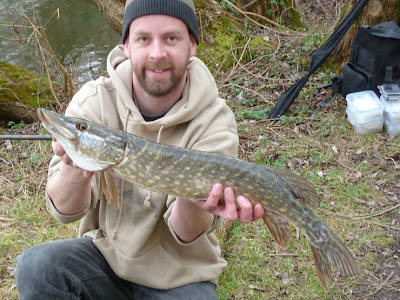 We fished on around the island making a complete circuit. The wind and rain were making bite indication virtually impossible, and after one more suspected run each, and no more fish we packed up as it was getting dark. Two more pike on the scorecard.

When myself and Darren decided to get weir permits he told me he never had any luck with pike. I thought how unlucky can you be with one species? But his prediction seems to be coming true, we are fishing the same baits (from the same bag) and fishing the same spots. The only difference between our fishing is I'll swap over to a float wherever possible, but most of the pike here have come to a ledgered bait.

I have had a lot of luck this season, hopefully it'll continue through to next season. I wonder how my luck will hold when competing with Darren on carp or barbel, species he has had a string of monster fish! 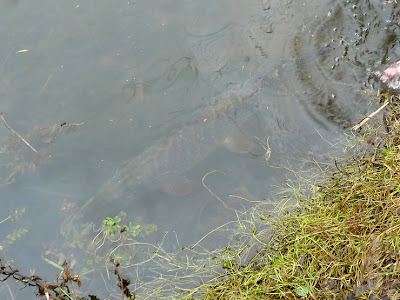