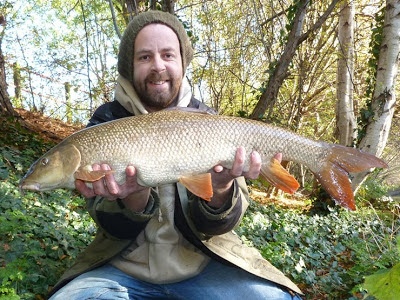 With less than 3 hours on the clock, including travel time, I raced down to the river. I headed for a stretch that produced barbel in the summer - no time for exploring today!

The river was still leaf-soup, but today I was prepared; I brought some 3oz leads. Accuracy was going to be the order of the day - the lead was going to make a hell of a splash in this little river. On the sharp end I fished two white maggots on a size 16 hook.

First cast hit the water like a depth-charger, but it was anchored in position. Next I threw out 2-3 maggots every 30 seconds or so, to keep a constant but minimal reminder that there was food in the water.

Five or ten minutes later the rod hooped round, I hit the fish and was initially concerned with how much crap was on the line, but it didn't take long before the barbel shook it free. Then a great fight, even by barbel standards and a 8lb 7oz fish was in the net.

With the swim thrashed I moved a short distance downstream and repeated the process, and after about 5 minutes I had another rod-ripping bite. But this one was quick, too quick to hit. For the next hour it was the same story, the barbel (or chub) wanted the maggots but weren't getting hooked.

I swapped over to a bigger hook and a bunch of maggots but the bites disappeared, not sure if they just wanted a small bait or if the brief feeding spell was over.

But my November barbel is in the bag, although I think the December and January ones are going to be the most tricky...