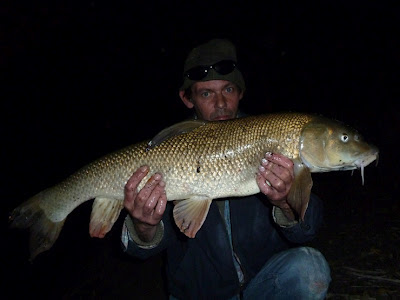 I've called it Title Two because I think this post could have been called 'A Brace Of Doubles'.

Seems like ages since we've ventured to the river, both myself and Dan are snowed under at work and the nights are closing in. Plus I've been baby-sitting a cat that lives miles away, over 2 hours out of the day... But this evening we managed to get to the river...

Slow start but eventually I hit a fish, only had it on for seconds, some you win etc... As I put the rod down Dan was in, good fish, looked like a double in the shallow water but it spat the hook after a few minutes - disaster?

An hour or so later another bite and he was in again, careful does it - and a new PB, 10lb 6oz, fantastic!

It turned out to be the one I had on the 4th, now gaining weight (which is great news), and Dan's second double, different swim, bait - great stuff!