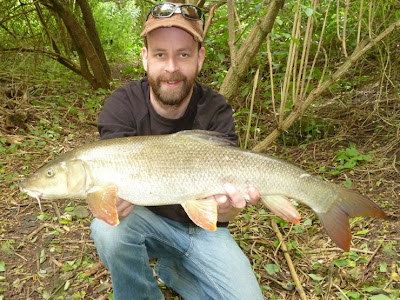 A few hours on the river this afternoon, and there were three things on my mind; minnows, barbel and roach...

Minnows: Infuriating little fish, I'd spotted a shoal a few days ago and today armed with bread on a size 18 hook I tried to add one to my species list. Had quite a few out of the water (confirming they are minnows) but they kept dropping off before they got to hand. I'll be back with maggots!

Barbel: I then met Darren just downstream, who had just lost a carp (one he'd caught before) and we went in search of a barbel. Fishing in a new stretch I ledgered sweetcorn on a long (4 foot) trace between weed beds - the idea being the bait would wash under the weeds and hopefully find a shy fish.

After about an hour a hooping bite (on my finest minnow quivertip) and a great battle amongst the weeds. Six pound line and a 14 barbless hook didn't seem like a great idea right now, but the fish was eventually steered out of the snags and a 7lb 1oz barbel was added to the challenge.

Roach: Darren had to head home and I had about an hour left. Time to head to the spot I caught a roach on Thursday - I've since seen my target 1lb+ roach among the smaller fish there. Ripping bite first cast, missed setting up the net. Ripping bite second cast and another baby barbel about 8oz. Third cast and I got a roach, not my pounder, but a lovely fish to end on.

Time for a sneaky pint! 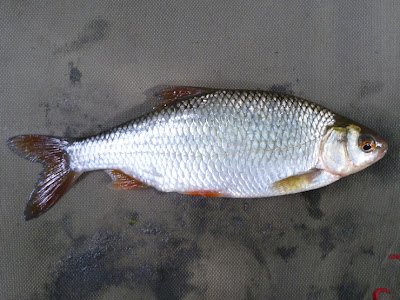 I did do a couple of hours last (Friday) night; 12oz chub, 8oz barbel and a 1lb 4oz barbel - one added to the challenge. I did however commit the blogger's sin and forgot to take my camera - just as well I didn't get a double.
Posted by Brian at 17:54