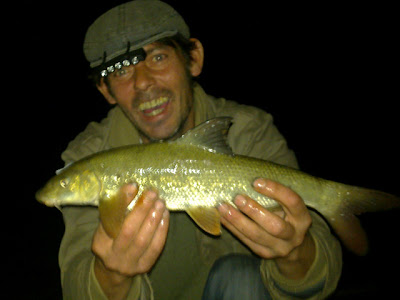 No, not Dan, the barbel he is holding. Dan wasn't having the best fishing session, wherever I cast I found barbel, Dan's luck just wasn't in this evening. And things got worse when, while distracted, his rod made a break for the water. I made a dive for it but it was too quick, the rod was gone. We searched the water for it with torches but we couldn't see it.

Once we turned the torches off we could spot the green glow of the mini glowstick deep in the water. I made repeated casts over it trying to snag it, and after about 5 minutes managed to snag the line. As I tried to pull it in, it pulled back, the thief was obviously still attached. I got the rod close enough for Dan to grab it. Dan then landed the culprit, a 1lb 10oz barbel. Dan was delighted with his catch... And relieved to see the rod and reel again!

Sorry for the crap photo, I hate my new camera phone and I'm hoping to replace it before shark fishing next month. 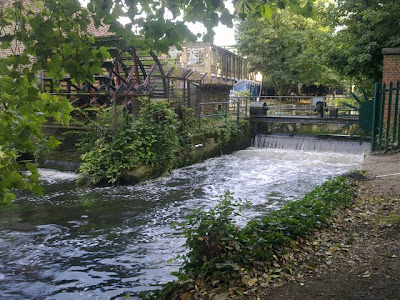 My evening was much better, we were searching the Wandte for barbel and I had three small ones straight away at the weir. We then tried a couple of different spots before arriving at the hole. I had one about a pound first cast, and a 1lb 9oz second cast.

Then back to the weir to finish the session. Dan fished in the weir, I fancied a spot just downstream, a spot that doesn't produce during daylight but I thought they might move there in the dark. Three barbel in four casts to about a pound before the action slowed down, and I had two more in the next hour. Then we had the rod thief incident. And I finished the session with a boot-lace eel.

So 10 barbel to 1lb 9oz, the luck was on my side this time - although Dan pointed out he got the biggest barbel!! 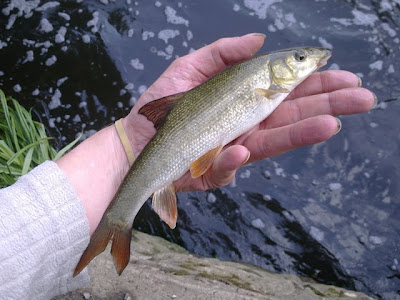 One of the smallest barbel, but I bet he could steal a rod!
Posted by Brian at 12:02