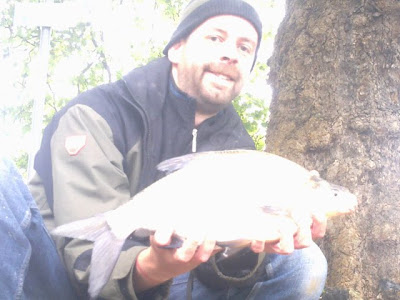 A few hours feeder fishing on the Thames at Kingston this afternoon, maze and sweetcorn groundbait and worm hookbait. Results: 2 bream, 2lb 14oz and 2lb 4oz. Loads of perch, some of which were pushing the pound mark. And my first ruffe (I didn't know they were in the Thames). 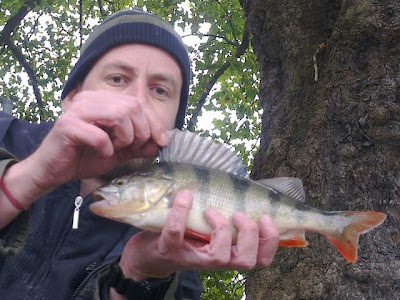 I need to work on my self-take photos!

I was using a cage feeder and, as normal, I recast every 60 seconds for the first 15 minutes and then every 5 minutes after that, an hour and a half went by without a bite and I was thinking of calling it quits, but a bite after about an hour & 3/4 (which I missed while wondering if the thing on the opposite bank was a big cat, a weird fox or a dog) brought me to my senses, it was a bite a cast after that.

It was great to get back on the river after being ill for a week. And the biggest bream is a new PB, shame about the photo, I definitely need a new camera. 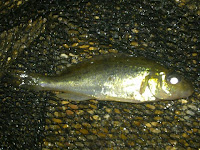 My first ruffe, I initially thought it was a baby zander...
Posted by Brian at 20:24