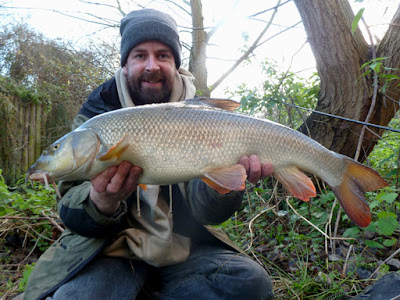 Having become obsessed with zander I seem to have forgotten my 100 small river barbel challenge, but today with 1½ hours of daylight on the clock I hit the local river after number 88.

It's mild so I thought they might be up-for-it, first swim I could feel little plucks at the rolled meat - but it was 12 or 14 little knocks before something nailed it. A barbel about 5lb was in the net. Two fat ladies - perhaps I could break top of the shop - the 90 fish mark before Christmas...

The next swim and it was 3 fish in three casts, about 4lb, 5lb and a weighed 5lb 4oz - thought I'd better weigh one as I might be under estimating them as I've been after zeds for the past month or so - I estimated 5lb and it went 5lb 4oz on the scales (top photo) - close enough!

I went for a bit of a wander and eventually bumped into barbel number five of the short session, about 4lb, taking my season total up to 92 small river barbel this season - eight left to catch... 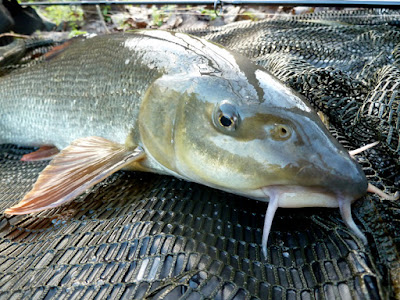