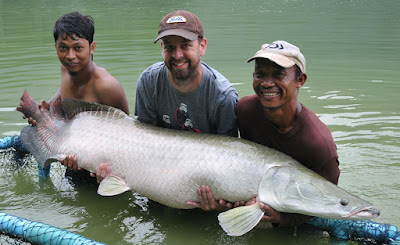 We bounced along the bumpy road, through the iron gates, my third and final day in fishing paradise (for this trip anyway). I'd already caught more fish than I dreamt I would and although I hadn't found an alligator gar it really didn't seem to matter any more. 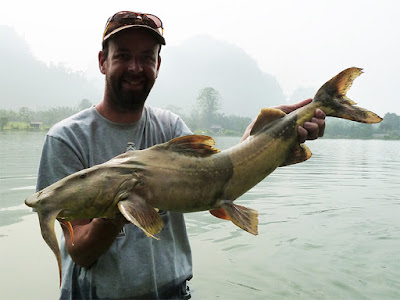 Time to catch some fish! And I didn't have to wait long, not exactly a run but something was pulling the pellet rod about and a strike was met with resistance - a highly prized goonch. What a start!

Next up the feeder/polly rod was away - a strike was met with a screaming run right across the lake before the line went slack - damn it. When I retrieved it you could see what had happened, the feeder was squashed flat. An arapaima had hit the feeder instead of the hook - I tried to bend it back, no chance, you'd need a vice and a hammer - never put your hand in an arapaima's mouth!! 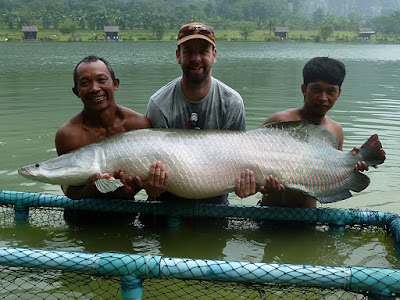 An hour or so later the deadbait was away - I hit it and it surfaced straight away, I knew what was on the end and it was big. Long powerful runs and at times stationery when you could just feel it's tail beating on the line. I lost all sense of time, might have taken 10 minutes or could have taken an hour - but finally it was in the cage - phew! 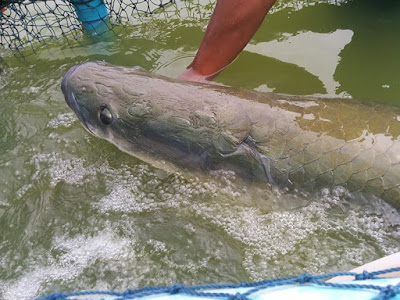 The cage: I asked Mike about the cages on the first day - they are pretty ugly things and not so great in photos. He told me that an arapaima would simply rip through a landing net, and on occasion smash their way out of a cage (you couldn't kick a hole in these things). In fact you can't wade or stand in front of one, you always have to walk around the tail end. My previous two had been quite passive.

This one wasn't! It span round and round, smashed into the cage, one angry fish. Seems the fight on the end of the line is just the first half of the battle, I didn't volunteer to hold the head end this time. A 65kg (140lb) arapaima - get in! 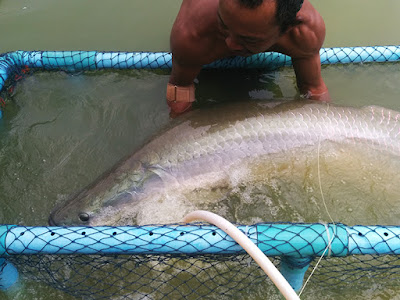 Baits were recast and I spotted an alligator gar, then another one - they seemed to be heading for the area I was presenting a deadbait - I crossed my fingers. Then the heavens opened - it pissed down.

When it's that hot the rain feels great, and a run in the rain was even better. I initially hoped it was one of the gar, but soon I realised it was a cat. Then there was thunder and lightning, in England I would have called it quits and pulled for a break (barbless hook) - I asked Bau if I was safe surrounded by cliffs - he didn't understand the question, I didn't understand the answer - he smiled, I kept fighting!

Another Amazon redtail on the books. Fantastic, but no photo this time, the rain would have killed the camera. 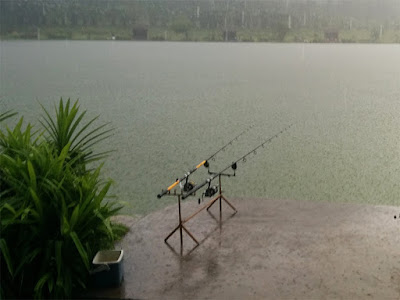 Next fish hit on the drop and again I saw it straight away - too big for a gar. The rain lashed down and my fish ripped off - it was {they are yet to invent word}. Again I have no sense of time for this, but long before it was ready it charged into the cage. And I thought the previous one was angry! The rain had stopped and I had a 80kg (180lb) arapaima in the cage - I f*cking love this place!

TC has a lot of skills but photography isn't one of them. She took the photo of the 65kg arapaima above - which is great, really great and the only thing she's ever photographed well apart from her thumb. Ever. It was never going to happen twice - but needn't of worried, I looked round and both her and my camera were gone - I later discovered she had gone round to the other side of the lake to take a photo of her thumb in front of a dog.

This was really not the time to be without a camera. Fortunately Mike came tearing round the corner with his camera - top photo (in both senses).

An hour or so later another hard fighting Amazon redtail rounded off the trip - I love these, photo below - his face says it all... 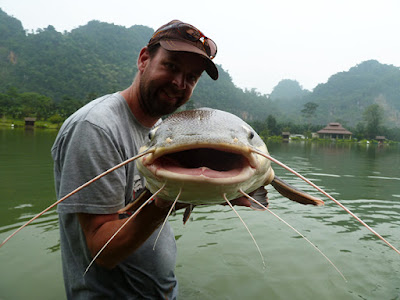 The day was over, what a trip! OK, no alligator gar - but the way I saw it that just gives me an excuse to come back. I still had exploring, snorkelling, canoeing, drinking and other holiday stuff to do in Thailand - I even managed to chuck a lure about in the clear blue sea a couple of times.

Just remains for me to thank Mike and the team and my guide Bau. I'm going to write a TripAdviser review which I'll stick on here as well, but in the meantime the Exotic Fishing Thailand links are below. Thailand I'm missing you already.